The Lerbach Round. The wisdom of the many. 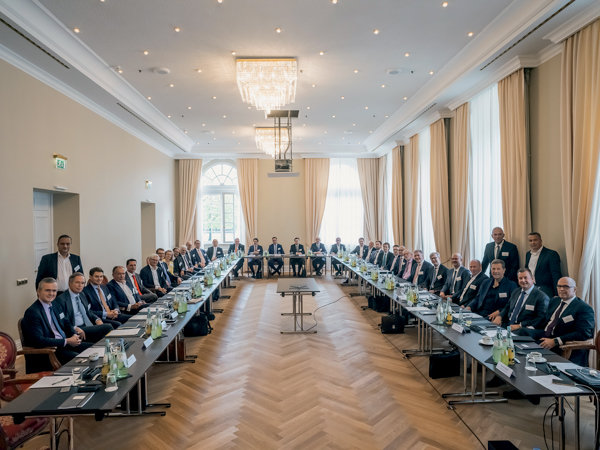 Panel of experts. The Lerbach Round Table celebrates its tenth anniversary. Since 2009, bankers, asset managers and family officers have met once a year to provide wealthy investors with inspiration and orientation. This year, they are not only scrutinizing the economy and capital markets. 36 proven investment experts answer the most important questions on the investment year 2020 and discuss the most exciting investment ideas and, in five workshops, also the most interesting investment themes. And take a broad look into the future - Roadmap 2040.

In 2004, US journalist James Surowiecki wrote a bestseller: "The wisdom of many - why groups are smarter than individuals". When after the financial crisis there was maximum uncertainty among investors, Kai Röhrl, Head of Wholesale, Robeco Germany, remembered the book and had an idea. "What would it be like to bring together the expertise of proven capital market experts in one group?

The Lerbach round was born. Its mission: to offer readers of private wealth inspiration and orientation once a year. In spring 2010, the round met for the first time - and was immediately confronted with difficult questions: What does it mean for investors that states will tighten their belts after the financial crisis and central banks will become expansive? The round's answer: If you want to increase your assets, you have to own real assets - shares, real estate.

At that time, the DAX stood at 6000 points, the TecDax at 800 and the S&P 500 at 1100 points. Since then, prices have risen two to three times. The idea of the wisdom of the many has worked from the beginning.

In the following years, the experts had to deal with numerous other crises. Starting from Greece, the next big crash seemed to be programmed in 2011 in view of the high indebtedness of many euro countries. The euro crisis followed in 2012. The round remained invested and said: "The perceived probability for the worst case is much higher than the actual one. Investors should not underestimate the reaction possibilities of entrepreneurs, politicians and central bankers. Half a year later - in September 2012 - Mario Draghi actually announced that he would save the euro, "whatever it takes".

In 2015, the round predicted that key interest rates in Europe would remain extremely low for at least another five years. That was courageous at the time. After all, all investors are eagerly awaiting an end to the zero interest rate policy. The Lerbach Round suspected that they would have to wait a long time and chose TINA as its leitmotif - "There Is No Alternative" to investing in equities. It has remained that way to this day.

"The Lerbach Round's greatest merit was clearly that it did not let itself be made nervous by the countless crises and risks and had always advised a high proportion of shares in its portfolio. Investors who had followed this strategy were able to build up a fortune in the last ten years," Kai Röhrl sums up.

Today, the Lerbach Round is once again facing major challenges. The global economy is on a slippery slope. The R-word makes the rounds. The industrial sector is in the midst of a global recession in view of the negative rates of production and incoming orders. Is the weakness now threatening to spread to the service sector, the labour market and consumers? Will this result in a more severe collapse of the global economy with massive declines in corporate profits and significant price losses on the stock markets? Or is this just a temporary phase of weakness?

The exit seems to be completely open. The wisdom of the many is in demand today as seldom before.

How will growth turn out?

Experts expect growth of 1.8 percent in the USA next year, 1.0 percent in Europe, 0.5 percent in Germany, 5.3 percent in China and 2.8 percent in the world. Although the professionals are a little more cautious than the consensus, they are still a long way from a real recession scenario.

The probability of negative growth over two consecutive quarters is estimated at 22 percent in the USA, 40 percent in Europe and 63 percent in Germany. The export-oriented domestic economy, in particular, is far from being off the hook.

An important reason for the skepticism is the assessment of the development of the trade dispute. Only one-third of the professionals believe that the punitive tariffs between China and the USA will remain at the current level or will be abolished again. 27 percent are of the opinion that the dispute between the USA and China or Europe will intensify. And 40 percent say that the outcome cannot be calculated. The uncertainty is therefore likely to persist for some time to come.

The danger of a currency war has apparently not been eliminated either. 53 percent are convinced that China will continue its policy of weakening the renminbi in order to support its domestic economy. 17 percent suspect that the USA would then also intervene.

87 percent of the professionals think this is appropriate. But at the top of the list of measures are no classic stimulus measures, because they take effect too late. The Round calls for tax cuts and long-term investments in infrastructure and education.

How will corporate profits develop?

In order to assess the potential of the stock market, corporate earnings will be the most important factor. After a weak year in 2019, the Lerbach Round expects a moderate increase of six percent for both DAX and S&P 500 companies in 2020. Remarkably, the round is much more cautious than the consensus among analysts worldwide. The analysts expect DAX companies to increase by 14 percent and the S&P 500 by ten percent. Disappointments seem to be programmed.

The Lerbach Round is convinced that the central banks will continue to keep their foot on the accelerator worldwide. The professionals expect the US Federal Reserve to raise its key interest rate by a further 1.25 to 1.50 percent by the end of 2020. The ECB will once again reduce the deposit rate to minus 0.6 percent.

However, 73 percent do not believe that the ECB can still have a significant positive impact on the economy. The horses are standing up to their necks in the water and are not drinking. What is the point of throwing a bucket of water behind them? The negative interest rates are now even having a negative effect because citizens save more and consume less. They want to plug the hole in old-age provision caused by the zero interest rate.

// 03 The investment strategy of the Lerbach Round.

According to the professionals, it would be very difficult to make a profit on the interest markets in 2020. Maximum diversification into a wide variety of investments is the key to success (page 50).

As far as equity markets are concerned, two hearts are beating in the chest of experts. In the long run, equities are highly attractive. After all, the valuations of the common asset classes - above all bonds and real estate - had risen massively in the zero-interest era. Only the price-earnings ratios on the stock markets are still on the average of the last 30 years. If interest rates remained at this level and if the recession failed, there would be potential for significantly higher valuations.

But we still have to be cautious. There is currently much "hope" in the market for stabilization of the economy. This could also change again quickly, fears the round. The experts are therefore taking profits at levels around 13200 points in the DAX, 28000 points in the MDAX and 3200 points in the S&P 500. The DAX is very favorably valued at 10700 points, the S&P 500 at 2565 points.

The currency forecasts of the professionals are also interesting. The strongest currency in 2020 will be the British Pound, because the hard Brexit is now off the table. There is even a small chance that the UK will reconsider its withdrawal from the EU after the elections on 12 December.

The attractiveness of the individual asset classes for the year 2020 is rated on a scale of 1 to 10 (1 means completely unattractive, 10 means very attractive): 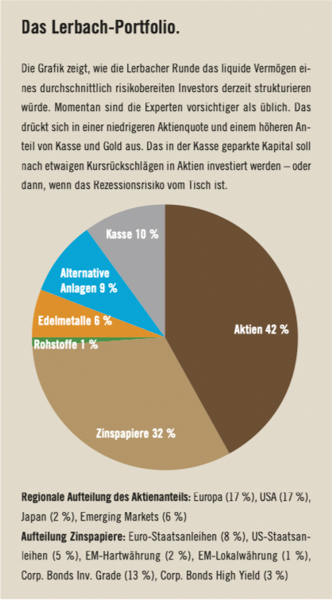 The increasing indebtedness is currently the most worrying aspect of the round. 85 percent agree with the thesis that in the future states will become more and more indebted in relation to the national product. 96 percent believe that the central banks will finance this policy. This is particularly worrying because it could shake long-term confidence in monetary policy and ultimately in our entire monetary system. 88 percent are therefore of the opinion that this trend towards monetary expansion will be reflected in the gold price in the future. Over the next ten years, the round expects the gold price to rise to 2650 dollars per troy ounce. For 85 percent, however, crypto currencies play no role in this context. There will be new forms of currency in the future. But they have nothing to do with Bitcoin & Co. because the states would never give up control over their currencies.

The best insurance against the risks from an unsound economic policy is - as ten years ago - to consistently focus on tangible assets. According to the experts, one million euros invested in interest-bearing securities will only amount to 1.12 million by 2040. Taking inflation into account, this is highly likely to be a loss-making transaction. If, on the other hand, the million is invested in global equities, the assets would rise to over three million in this period. And the DAX? According to the intrepid long-term forecast of the Lerbach Round at the end of 2040, the DAX is trading at 35745 points.®