The future in the depot. 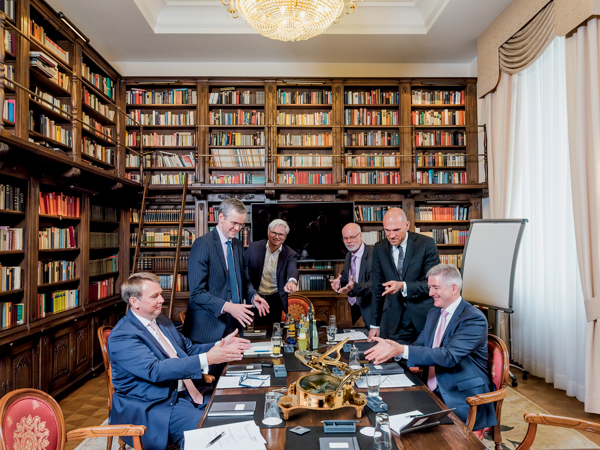 Markets. Countries with strong growth and major challenges are attracting investor interest. The Lerbach Round sees investment opportunities both in emerging markets and in the so-called frontier markets. Your favourite: Asien.

The rationale for investing in emerging nations is as plausible as it is simple: Compared to the industrialized nations, there are more people living there who are striving for prosperity, growth and consumption. Accordingly, the turnover of companies, their profits and their share prices should increase at an above-average rate. At the same time, the companies there are younger - i.e. more modern - and more flexible in their structure, which should further increase their growth potential in the long term.

"This story is also true in the very long term, but that doesn't always apply," explains Bernd Riedel, Robeco. Since 2018, for example, stocks in the emerging markets have performed worse than those of the industrial nations. The MSCI Emerging Market Index has fallen by 15 percent in the past two years, while the market barometer for the industrialized countries, the MSCI World, achieved a plus of a good ten percent. "It is particularly interesting that the valuation ratios have become more favourable as a result than seldom before. While the price/earnings ratio in the developed countries averages over 18 and the dividend yield is 2.6 Prozent, these ratios look much more attractive in the emerging markets with 13.6 and 3.2," Riedel calculates and asks: "Is it time to invest more in these markets?

The Lerbach round answers this with a double "Yes". "Investors must be invested there simply because of the weight in the global economy," Martin Klein, Managing Director Asset Management at Heidelberger Vermögen, makes clear, and calculates: "The gesamten Schwellenländer have a share of 59 percent of the world's social product. China alone contributes 18 percent. The USA is only 15 percent. Those who want to participate in the development of the world cannot ignore these markets."

"In addition, there is a tactical argument," adds Helmut Kaiser, chief strategist at Deutsche Bank, "Emerging markets are doing better if interest rates in USA zurückgehen and the dollar do not appreciate strongly. We see both in the trend next year."

Where do the professionals set their priorities? Bernd Meyer, chief strategist at Berenberg Bank in Hamburg, sees the state as well positioned: "The government and the central bank are supporting the economy, but not as intensively as in previous years. They have understood that the indebtedness in the companies is too great. You don't put the pedal to the metal now, but you make sure that the credit impulse is gently rising - and that's a good thing."

Jörg Borgers of Family Office Relevo also says: "Investors should favour the Asian region." This is where the strongest growth takes place and where future technologies such as robotics and AI, artificial intelligence, are at home.

Helmut Kaiser names China - "the most important economy in the region" - and India - "the greatest catch-up potential" as preferred markets. Alexander Ruis, SK Family Office, is also banking on China. Ihn convinces the important role for the entire region. Ruis also finds Taiwan interesting as a leading nation in semiconductor technology. "I'll see Korea and India in the second row."

Jörg Borgers advises investing up to 30 percent of a global equity portfolio in Asia. "I'd cut it in three: China, India, Southeast Asia - the latter scores above all with a young population, a high level of education and great consumerism. This gives investors good market coverage."

The experts would not ignore two other regions - Eastern Europe and Latin America. With an average P/E ratio of less than 7 and dividend yields of 5.6 percent, Eastern Europe is the most favourable investment region mit Abstand . Jörg Borgers finds Russia particularly interesting: "The country is convincing with its solid economic development, its debt is low and its foreign exchange reserves are high. Thanks to the wealth of gas, Russia remains interesting even when there is a crisis elsewhere."

"However, not every investor is willing to invest his money in Russia, as the political system is viewed critically," puts Alexander Ruis into perspective.

In South America, the Brazilian stock market in particular has received a tailwind in recent months. "The new Economics Minister Paulo Guedes awakens great hope among investors," analyses Helmut Kaiser. Guedes has cleared the way for interest rate cuts and thus boosted Brazil's economy. "This is already included in the courses. However, should the stabilization of the economy stabilize, significantly higher prices will be possible in the future. Anleger should stick with it," advises Kaiser.

The investment experts also regard the so-called frontier markets - 40 countries whose development still lags well behind the emerging markets - as an attractive addition. These include Egypt, Kuwait, Vietnam, Morocco, Nigeria, Ghana, Bahrain and Romania. "I find it particularly interesting that frontier markets not only have huge long-term economic potential. Weil If the stock exchanges there tend to develop independently of the world's stock exchanges, they ensure a stronger diversification in the portfolio," argues Bernd Meyer and continues: "However, they should definitely be regarded as a long-term, strategic investment, which is also maintained in the event of short-term irritations. Because, of course, the political risks in these markets are higher than elsewhere."

There's an extra chance for that. "As they evolve, some of these countries may be promoted from the frontier market indices to the 'large' emerging market indices. Then more money will flow into these markets and that will drive the prices," informs Martin Klein.

When implementing the ideas, the experts strongly advise against individual investments. "A mixture of ETFs and active funds is the right way. Markets are volatile, follow regional rules, and not every market functions smoothly. It is therefore important to diversify widely and to make use of the expertise of experts," concludes Alexander Ruis.

The editors of private wealth have identified funds that fit the minds of professionals. They're ideas, not investment recommendations.

How to earn it Klaus Meitinger 474
entrepreneurship. The couple Martine and…