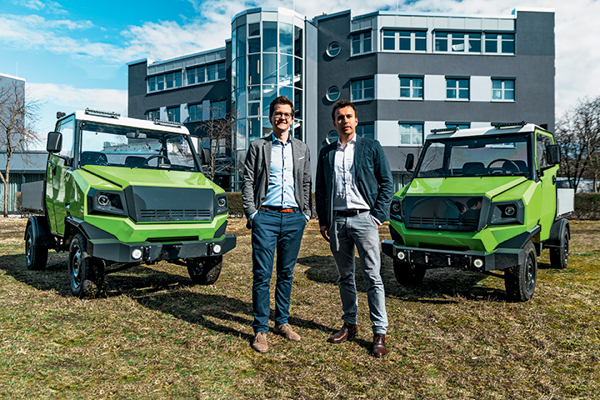 Social entrepreneur. Economic development in Africa needs a new mobility concept. The entrepreneur Martin Šoltés and his colleagues have therefore developed a special electric vehicle. To improve the lives of many Africans, he seeks impact investors.

With his backpack on his back, accompanied by four students, Martin Šoltés, doctoral student at the Technical University of Munich, stands in Ghana's capital Accra in West Africa. It's January 2014. Their project: to boost the economy in the rural regions of Africa and at the same time achieve something for the environment.

After two weeks it is clear: The problems for the people in the countryside start where the roads stop. Because the promised transport by truck did not take place, the farmer sits in front of the rotten remains of his harvest instead of selling them in the next town. "Our result was that the farmers needed a suitable vehicle tailored to their needs - affordable, resilient, cross-country and independent of fuel," says Šoltés. "The best economic, technical and ecologically sustainable solution is an electric vehicle."

Back in Munich, the aCar mobility research project begins. Mobility is a basic human need. Economic exchange, social participation, independence and autonomy are difficult to achieve without mobility. It is the basis for progress and development, for equal opportunities. Šoltés and his students are convinced: "Only if we provide people in rural areas with an environmentally friendly vehicle can we do something about the biggest problem in the long term: the rural exodus.

In order to live up to this claim, a vehicle must be developed that looks completely different from what we are used to from our roads. "It had to be adapted to local requirements - rustic, not broken, with all-wheel drive and low maintenance," Šoltés makes it clear.

The first prototype of the aCar at the TU is still made of wood and cardboard. In order to obtain feedback from potential customers, some Africans are invited to Munich.

Researchers learn from them, for example: What the Europallet is to Europeans, the rice bag is to them. So the loading area is adapted to the African rice sack size. In the meantime, the scientists have also obtained support from industry.

With the help of several medium-sized companies from the automotive industry, they build a two-seater platform truck with electric drive within a few days without any frills. The proof of concept then takes place on site, in Ghana. "After the first few metres there was no more discussion," Šoltés proudly explains.

Together with Sascha Koberstaedt, Šoltés starts his entrepreneurial adventure in 2017 with his own company as a spin-off of the TU Munich. With the name - Evum - the two set a strong signal. "It is derived from the Latin 'aevum', which translates as immortality. That's our motto. We want our products to last forever."

And something else is different from the classic car industry. "Our primary concern is not monetary profit, but impact. We want to achieve a concrete, measurable positive impact on the environment and society. And make the world a better place."

The first investments will be made by partners from small and medium-sized enterprises. Three companies are participating in the start-up with a total of five million euros. A model factory is currently being built in Bayerbach, Lower Bavaria, for series production, which is scheduled to begin in the spring of next year. There you can gain experience and get to grips with possible childhood diseases. 1000 vehicles per year are to be built from April next year.

"Our entrepreneurs are close to the topic and believe in us," assures Šoltés. That was essential for the two founders. They speak of "smart money", not just money, but also commitment and know-how. And by the quick decisions of their investors. In general, the Evum idea was convincing. "We were in the fortunate position of being able to choose how to shape our shareholder base."

One of the shareholders is Joachim Glatthaar. The medium-sized building contractor from Swabia took part two years ago. Although he comes from a completely different industry, he is convinced of Evum's potential: "Evum occupies a market niche, offers unique selling points and a good price-performance ratio. They will be triumphant in the foreseeable future."

That initially no return is to be expected - no problem for the self-confessed Africa fan Glatthaar. That's the same with start-ups, he says. "What's important to me is that the vehicle is a sustainable product." If he had to, he would be willing to invest even more: Glatthaar wants to stay with it.

What the entrepreneur likes: The purist Evum-Stromer is a real load donkey and can transport a payload of one tonne, no matter whether people or goods. The range of the battery is 80 kilometers "and is completely sufficient for the purpose," says Šoltés. "Besides, a small battery saves resources. There's no air conditioning, no airbags, no radio. We have concentrated on the essentials. At first we even didn't have any doors. But that didn't work out."

It is also interesting that the battery offers many other application possibilities. It can be an energy source for a pump or - with additional superstructures - transform the vehicle into a mobile medical practice and a water treatment station. Solar modules on the roof of the car provide additional energy. The battery is charged at a normal 220 volt socket, which takes seven hours.

But even in Africa it is not possible to do completely without luxury. "Chromed hubcaps, for example, are extremely important there. Without them, a car is not a car. Or speakers with an interface to a cell phone for listening to music."

In the medium term, the aCar is to be produced in Nigeria, Ghana, Kenya and Tanzania. "This is also an important part of our concept," explains the founder. "We don't want to export, we want to give people jobs on the ground." It would also not address import barriers and trade restrictions.

The first microfactory in Africa could open in 2021. So that expensive machines do not have to be purchased there, the assembly is geared to manual work. Local experts are first trained in Germany before passing on their knowledge in Africa. As many components as possible are to be manufactured locally in order to strengthen the local economy.

Only more complex parts such as batteries and electric motors still have to be imported. "With a price of around 10000 euros, the electric transporter should then also be affordable for African conditions."

Contrary to original expectations, the minimalist electric truck has meanwhile generated interest even in Europe. Caretakers, nurseries, winegrowers, alpine farmers, municipal enterprises, they all see something in the Evum-Mobil that they have been missing so far - more of a tool than a car.

This is another reason why the Swabian entrepreneur Glatthaar founded a sales company together with Evum. From mid-November onwards, the medium-sized company wants to play on its contacts to local authorities and craftsmen in Baden-Württemberg. This is a stroke of luck for Evum and its 50 employees. Even though since the recent revision of the Evum mobile there have been extensions such as the "communal triangle", which can be used to integrate additional modules such as a sweeper or snow plough, adjustments to the market in Europe are hardly necessary. "Our European customers have very similar requirements to the African ones."

Šoltés expects that initially up to 90 percent of cars will be sold in Germany. Due to the higher production costs and the more complex road approval, the price of around 30000 Euro is three times higher than for the African version.

"Our commitment must also be entrepreneurial," Šoltés underlines the idea of social entrepreneurship and impact investing. "It's all about making a profit and achieving a social impact at the same time. We enable mobility for people in rural areas of emerging and developing countries. And with the electric drive we avoid harmful emissions such as CO2 or nitrogen and thus contribute to better air and less noise. We can prove that."

By 2025, an annual production of more than 100,000 vehicles is to be mastered in eleven markets. Then, the entrepreneur is confident, his company will also make a profit.

However, Evum will need further capital from spring 2020. According to the start-up company's calculations, production start-up costs for series production amount to ten to 15 million euros. We are now looking for impact-driven investors who want to provide medium to long-term capital, share the Evum idea and are initially satisfied that their investment will make the world a little bit better. ®

How to earn it Dr. Ludger Wess 152
Medical technology. People with donor organs must…