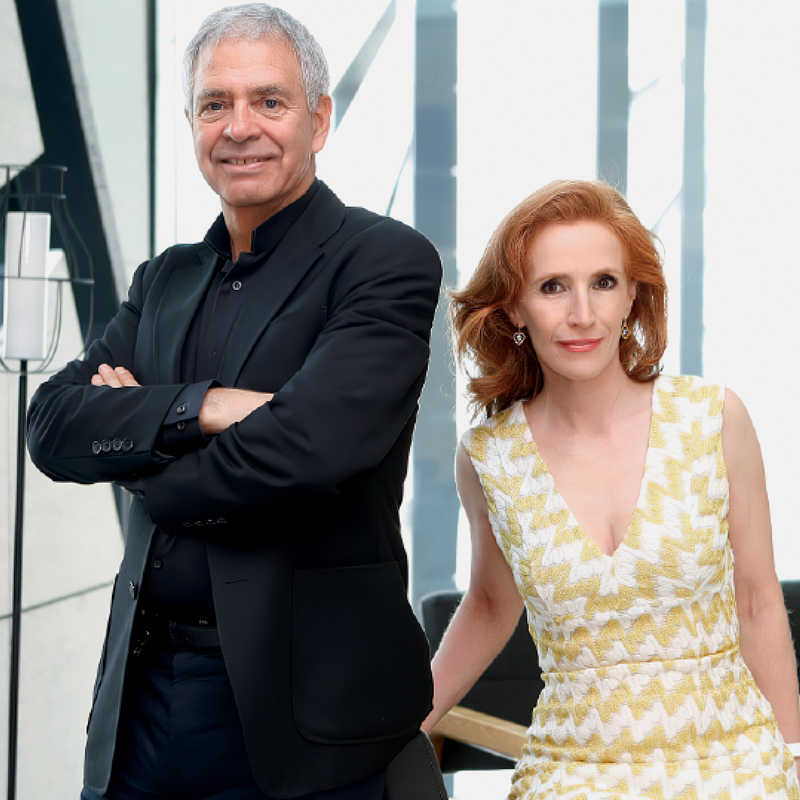 Art. The first Virtual Reality Museum was founded in 2016 by the Paris-based collector couple Sylvain and Dominique Levy. It manages one of the most forward-looking private collections of contemporary Chinese art in France, revolutionizing the history of the reception of art. Its history reflects the great adventure of the Levy family.

The museum building lies in the middle of a breathtaking landscape. Huge arcaded halls flank an unconsidered inner courtyard. People with a small appearance stroll through the halls and look at the selected works of art in the collection. The atmosphere seems very relaxed. And that's not surprising. Because the museum exists only in the virtual world.

"When Dominique and I decided to collect contemporary, we also thought about how such a collection should be presented in the most meaningful way. We wanted to choose a method that fits into the present," explains Sylvain Levy. At a time when apps are as important as objects and speed is important, it is essential to open up to the digital world. "It also gives us the opportunity to open our collection to a wider audience."

Dominique and Sylvain Levy have been collecting since the 80s. They are initially interested in Western modern art. Then for antiques. When they travel to Shanghai in 2005, the two are fascinated by the vibrating energy of the city. "Art is the mirror of society. We were looking for the same energy in Chinese contemporary art that we experienced in Shanghai. That was the beginning of our great adventure."

For more than two decades now, the two have been dedicated exclusively to the processing and exhibition of contemporary Chinese art under the label dslcollection. The collection includes works from the avant-garde exhibition of 1989 such as Ai Weiwei or Zeng Fanzhi as well as exhibits from the latest generation, including Ding Yi, Cui Xiuwen, Jiang Zhi, Lin Tianmiao, Qiu Zhijie, Xu Zhen, Zheng Guogu and Zhou Tiehai.

Many of them have played an important role in the development of contemporary art in China. In some works, the influence of Western art can also be seen. Hu Jiemieing's work "Floß der Medusa" (2002), for example, draws a parallel between the social decline depicted in Théodore Géricault's famous "Medusa" (1819) and the Chinese Cultural Revolution. The artist creates the transition to the present by depicting a colourful, partly naked and above all consumer-oriented society, which he contrasts with black and white figures, dressed in traditional Mao uniforms.

Other artists comment on the social discrepancy brought about by rapid economic growth. The "Comfortable" installation by Shanghai-based artist Xu Zhen, for example, transforms a minibus belonging to Chinese workers into a gigantic washing machine. It stands as a symbol for the everyday life of people who are not privileged enough to experience the fast pace of life in glamorous cities.

What is purchased is demanding, challenging and unique for experienced collectors. Without concentrating on a particular medium or group of artists, they collect painting, video, photographs and sculptures as well as space-filling installations or the latest productions in the field of digital art.

The greatest challenge is regularly to acquire the best quality work of each artist. That's why the Levys concentrated early on the purchase of large-format works. "There are simply fewer competitors there," explains Sylvain Levy.

In principle, the two pursue an entrepreneurial approach. The collection is limited to a maximum of 350 works. If one work is added, another is sold. As a rule, the handling rate is ten percent per year. In this way, the collection remains in motion and reflects the fast pace of China's development. There is no economic motive behind this strategy. On the contrary. "Collecting is an elegant way to burn a fortune. The financing comes from the fruits of my professional activity in the real estate sector," says Sylvain Levy.

As a result, according to Dominique Levy, this strategy should give the collection a soul. The selection must be made carefully, each purchase is highly personal, is like a word that is placed so that the sum over time makes a story: the story of the collector couple Levy.

As the collection grows, the question arises of how it can be disseminated and made accessible to a global audience on as many levels as possible. A museum is out of the question. "Anyone who runs a museum becomes an institution and must submit to certain rules and obligations when collecting. But we wanted to collect whatever we felt was right at a certain moment. And we wanted to be proud of our mistakes. After all, it's our personal adventure."

In short, the Levys want to act unrestrictedly and reach as many generations as possible. Instead of waiting for an audience, they enter new shores and go where the visitors are: to the Internet.

"Cultural diversity, technological and personal mobility are changing our world," says Sylvain Levy. The use of the latest technologies to publish the collection is therefore a matter of course for the couple. Since 2005, they have made use of the most diverse technical possibilities and present their collection on the Internet, via iPad applications, free e-books or 3D applications.

They are active in the online 3D world of Second Life and have been sharing their Internet-based Virtual Reality Museum since 2016, which gives the global public access to their works of art. In addition, the world is informed multilingually through all social media channels such as Facebook, LinkedIn or Instagram. The dslcollection is thus the best example of how a screen-oriented consumer society can reach new and younger target groups worldwide.

Some works of the dslcollection are larger than life and difficult to transport. Analogous to the idea of the portable museum by Marcel Duchamp, these works of art are presented in the Virtual Reality Museum. The collectors commissioned the Paris design studio Monochrome with the design. It specializes in 3D real-time experiences in the field of virtual reality. The condition was not to create a classical white cube building, but to use the advantages of VR, so that a museum based on immersion and interactivity can be created without physical restrictions.

Monochrome then created a museum building that can be seen both on foot and in flight. The construction of the complex took only three months and, according to Sylvain Levy, was not very expensive. Through teleportation, viewer and artwork enter into a new relationship. Visitors can move freely inside the museum, without restriction in terms of time and space, and explore the selected works at close range in 3D - like Jia Ali's 15 by six meter sculpture.

The environment adapts to the perspective of the observer. Every work of art becomes a central element of reception. According to the Levys, VR offers older people the opportunity to see exhibitions in New York, Paris or Shanghai. And the younger generation is again trained in art through the gamification component.

Because one thing should always be taken into account: The habits of the young visitors are extremely digitally controlled.

Today's museum visitor is no longer a traditional observer, but an interactive art consumer.

According to a study by Culture Track, visitors concentrate on the artwork for only 15 seconds, while the experience around it gains more and more time and importance through staged photography and subsequent sharing with the community on social media channels such as Instagram. The respective work of art thus also acquires a much broader external perception. This is another reason why the digital dissemination of art as promoted by the Levys is absolutely contemporary.

Of course, no collection is ever complete. The next logical step for Dominique and Sylvain Levy, for example, could be to integrate the topic of artificial intelligence. After all, China invests more in this area than any other country.

Sylvain Levy knows that this technology will also affect humanity. Nevertheless, he prefers to continue investing in the concept of augmented reality. "Virtual reality is also a great medium for artists."

Under the direction of Daniel Birnbaum, the former director of the Moderna Museet in Stockholm, the production company Acute Art offers contemporary artists access to cutting-edge technologies with which they can translate their creative visions into new digital media - including virtual, extended and mixed realities.

The company was founded in 2017 by the Swedish collector Gerard De Geer and his son Jacob. Acute Art has already developed a number of ambitious collaborations with artists such as Jeff Koons, Anish Kapoor and Yu Hong during its short lifespan. Performance artist Marina Abramovic will present her first VR work Acute Art at the upcoming 58th Venice Biennale. Other production companies like Khora Virtual Reality create virtual spaces for museums. And the dslcollection has recently commissioned two works from Miao Ying and Shezad Dawood.

"Collecting can give an ordinary person an extraordinary life. Artists who reflect the zeitgeist also allow collectors to be part of the changing world," Dominique and Sylvain Levy conclude. The two have positioned themselves - "a little in the past and in the present and with the head also a little in the future." ®

Admittedly, the digital implementation will never be able to replace the physical encounter with a work of art. Recent examples in the art market - such as the sensational online sale of a work by Albert Oehlen at Gagosian or the Instagram sales at Galerie Lévy Gorvy - show, however, that new technologies can play a significant role in the sale of works of art. Museums and institutions are also increasingly relying on audiovisual qualities and expanded realities to reach people across borders and regions.

Over the past ten years, the dslcollection has played a pioneering role in this field. For them, digital dissemination is an alternative supplement to the real experience of art. In 2017, the famous Kremer Collection from Cologne also opened its first private Virtual Reality Museum.

Visitors can experience the works of old masters such as Rembrandt van Rijn and Frans Hals, collected over two decades, up close in a museum atmosphere.

The VR Museum of Fine Art, developed as a video game, also shows famous works of art that under "normal" circumstances could only be viewed during a long journey. After all, the exhibits shown there are spread over ten countries. Thanks to virtual technologies, art lovers can now interact with these works of art in a completely new way.

A further advantage: no museum supervisor will point auf Öffnungszeiten out and tell the visitor to stay away from works of art.

These museums are well worth a virtual visit:

Photos: Courtesy of DSL Collection and the artists