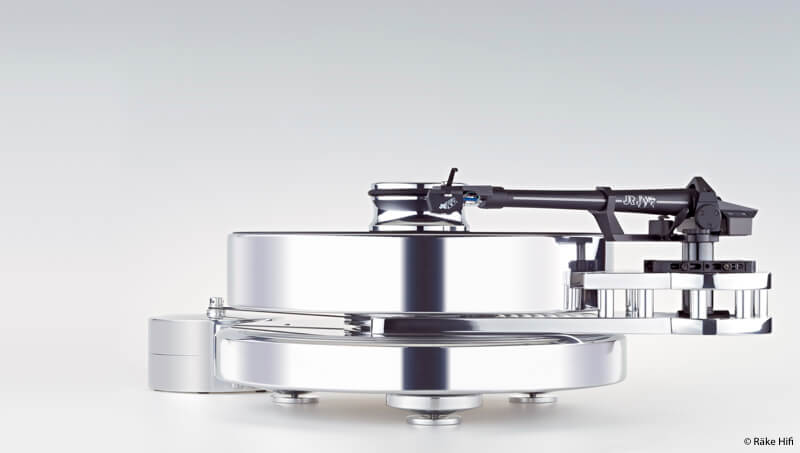 Already as a teenager Jochen Räke had put together his first record player from a kit from England. Characteristic of its name: Connaisseur. Actually, the son of an agricultural machinery dealer should have followed in his footsteps, even studied engineering, with a focus on agricultural machinery technology, but then used the knowledge of mechanics in his own way.

Through his student job as a hi-fi equipment salesman, he became the general importer for Transcriptors, a British record player manufacturer. The record players made in England were technically far superior to German products, but lagged behind in terms of quality and series consistency.

For the trained mechanical engineer and passionate electronics technician Räke, this meant first of all completely checking every imported transcriptor and, if necessary, making it functional. "Alone on one tonearm we sat for at least an hour. The single-point mounted arm was a truly groundbreaking innovative solution. Often bent and incorrectly mounted, it was - especially in Germany - but not deliverable."

Jochen Räke made more and more improvements to the Transcriptors over time. Consequently, from 1973 on, he marked his optimized versions with his own brand name: Transrotor. Following his philosophy of maximum quality, Räke finally developed his first own model, the AC (for "acrylic glass"). This was new in essential points and state of the art: chassis, drive, bearings.

Räke also had innovative ideas in sales. In the first years he enclosed a warranty card with his 2200 Mark Transrotor-AC turntables. Anyone who returned them filled out with name, age, profession, stereo system, date and place of purchase received a nameplate with their name on it. 95 percent of the buyers made use of it. Affordable market research through which Räke learns a lot about its customers. "The action with the guarantee cards would be absolutely unthinkable today. I don't think anybody would go along with that. Of course, we knew exactly who was buying our equipment at the time. These were mainly higher technical professions."

From then on, Räke was able to develop tailor-made products for the technical connoisseurs.

However, it was precisely these who became interested in the first series-produced CD players from autumn 1982 onwards. You went with the future - and it was digital. The CD was supposedly far superior to the analog record, it knew no crackling, no scratches, no wear. Entire record collections ended up in the trash.

Already in the year following the market launch of the new digital technology, Transrotor's turnover had shrunk by one third. Renowned record player manufacturers such as Dual and Thorens went bankrupt. Räke's gloomy prognosis seemed to prove true. He continued with his turntables as before. And continued to try to optimize the quality of its products.

His tendency to always meticulously research improvements in often neglected design details finally enabled his company to survive. In order to make his record players less sensitive to external mechanical influences, he works with vibration-damping rubber compounds. As a by-product, highly damping absorber feet were created - Räke called them Transrotor Speaker Pucks - which are not insignificantly reminiscent of the turntables of his turntables, which are equipped with round additional weights. At the beginning of the 1980s, the pucks replaced the then popular tennis and squash balls under the loudspeakers.

A short time later he even developed jumbo pucks with a metal surround for larger loudspeakers. The income from this additional business more than compensated for the decline in sales of record players. Golden times despite slump in demand.

"The euphoria about the CD, the new, 'ideal' sound carrier, propagated by opinion leaders such as Herbert von Karajan, was fortunately quickly followed by disillusionment," recalls Räke. The talk of hard, overanalytical digital sound makes the rounds. The differentiated, warmer analog sound is now the benchmark by which CD players must measure themselves. "Sounds almost like a record", becomes an integral part of the test results for particularly good CD players.

Räke's devices became the reference for the digital competition. After a long dry spell the analog suddenly becomes hip again. An affirmation for those who had always known. Just like Jochen Räke's wife, who encouraged him again and again during the crisis years: "Jochen, don't give up on the turntables! Just wait and see, they'll be back."

When the renaissance of the record actually began at the beginning of the noughties, many an analog returner had to learn that many of the familiar record player models and their manufacturers no longer existed.

The few remaining companies, including Transrotor, are experiencing a real boom. Demanding customers demand ever higher quality equipment. And are willing to invest a lot of money in phono technology.

Turntables are regarded as technologically mature and accordingly future-proof. Unlike the CD, which falls victim to the second digital revolution. Today, any notebook can be upgraded to a high-end music player in combination with the appropriate network technology. No moving parts, no motor that vibrates or transmits vibrations. In the network player, listening to music completes its decades of metamorphosis - from shellac and vinyl to tape, cassette and CD to dingless existence as an audio file from the Internet.

The listener of digitized music needs neither a record cabinet nor a CD shelf. He finds his music in the Explorer. And the audiophile PC's sound is also getting closer to that of the world's best turntables than any CD player has ever been able to. "In the meantime, the purely digital range of high-res files has actually arrived at our sound level. Even the most expensive amplifiers and speakers won't make the difference with analog records," admits Räke. "To get similar quality out of a record, you need very high-quality equipment like ours. And they cost accordingly."

The Räkes oppose the digital revolution with the "philosophical record". The special thing about a record player is that customers deal specifically with the products, with buying records, with setting up the device. "Unlike a computer, a record player is a real music device."

He experiences how this is reflected in his behaviour at demonstrations and trade fairs all over the world. "As soon as an analog turntable comes into play as the source of the music, people become calmer, completely focused on the music. The attraction obviously lies in the restriction. There is no index-sequential jumping back and forth. Music lovers listen through an entire page of records, 15, 20 minutes long, even the pieces that may not please so well."

The record is obviously the slow food of the music business.

Jochen and Dirk Räke serve exactly this segment with their analogue pleasure machines, which today are built by 15 employees at Räke HiFi in the basement of a large detached house in Bergisch Gladbach in the Rhineland.

The Transrotor turntables, which are handmade here for hours, are among the best in the world. They weigh up to 220 kilograms. Technical masterpieces made of stainless steel, aluminium, brass, glass, acrylic glass, state-of-the-art plastics and natural slate. Built for eternity, highly polished, chrome-plated or even gold-plated. All subordinated to the one goal, to let the thin black vinyl disc rotate at an even speed with as little disturbance as possible. Its customers spend a relatively large amount of money on it: The Artus FMD drive is with 118000 Euro in the price list, mind you without tonearm and pickup.

"Today," the entrepreneur makes clear, "the company is in better shape than ever before. And that has a lot to do with the fact that my son has been with us for ten years."

Dirk Räke has been fascinated by music since early childhood. He learns to play the violin and guitar, studies musicology, breaks off his studies and goes astray - concretely, in the publishing industry. In 2007 he joined his father's company. "I've been apprenticing with my father since I can remember. No exaggeration: As a bedtime story, my father once explained to me how a tonearm works." Jochen Räke adds: "We have never really talked much about anything other than turntables. That started at breakfast. And then throughout the day."

Until his son joined Räke GmbH, Jochen Räke had mainly concentrated on his home market: "I didn't push export so hard. Although I speak English quite well, writing and doing everything in English is a hard job for me." Dirk Räke is therefore responsible for international business from the very beginning. Today the two from Bergisch Gladbach sell 1200 record players a year, more than ever before. "In the last decade, we have worked much more for the international markets. In the past, half of our sales were in Germany, today it's just under 45 percent," explains Dirk Räke.

Today, the two are two equal managing directors in the GmbH. And have agreed on a clear division of labour: Export, the entire foreign distribution, is the business of the second generation, the home market as well as the production remain with the company founder. They now develop new devices together, hand in hand. "Dirk Räke calls it "very elegant".

But this was not always the case: "In the beginning we already discussed a lot. Sure, someone gets into a company that runs automatically and has his own head, his own will and his own ideas. After a while, however, everything calmed down. Probably also because I don't have such a huge ego that I think I have to do everything differently. I want to make my work fun for everyone here. I essentially want to keep the company as it is. Also because I think it can only work this way or that way. How arrogant it would be if I said it's been going wrong for 40 years."

Nevertheless, they do not have a concrete plan for the company transfer. Although this is also a topic from time to time, one has not written down ten points that determine when what is to be done or what is not to be done. Jochen Räke: "I could no longer manage the company as it is now on my own. I'm 76 now, and my work here is finally done. Knocked on wood, I still feel good and think I am master of the situation. Dirk, you must tell me if that is no longer the case." "Let's make it clear then," replies Dirk Räke and adds: "In practice, things are already moving very slowly from one hand to the other." Jochen Räke: "Yes. We are still equal partners. But at some point I have to tell myself, too, that's it for me now. And sneak out of here slowly."

Dirk Räke is a pragmatic and patient person. The stoic turning of the transrotors seems to have transferred to him: "I will certainly not achieve my father's iconic status. But it doesn't have to be, I can accept it now. Maybe one day something will come out of my pen. I have hopefully still a few years before me."   ®