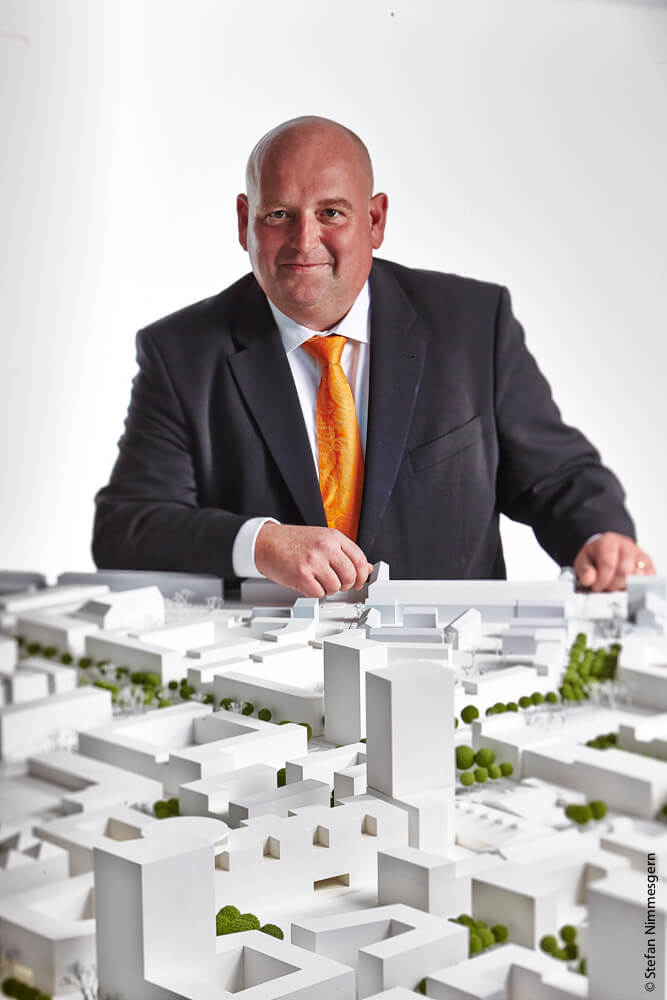 Real estate development. In the east of Munich, a city grows within a city. The plant district comprises 38 hectares, 600,000 square meters of floor space, 1,000 apartments and 300,000 square meters of new construction. Three and a half years ago Werner Eckart (right), initiator and visionary head of the construction project, presented his plans in private wealth (04/13). Now the head of the Pfanni dynasty has landed a special coup.

For 15 years the city of Munich was looking for a place for a new concert hall. In vain. Werner Eckart, managing partner of Otto Eckart GmbH & Co. OTEC KG, joins the ring. In 2015 it will offer the Free State a suitable site in its Werksviertel construction project. But he makes it clear from the outset: "I don't sell!"

With this attitude he remains steadfast, because "we think in generations! This is where our family is rooted. I can't afford to sell a piece of land in the centre of the factory district. From the noise protection concept to the gastronomy around it, everything is coordinated with the concert hall. What if the city then changes its plans and suddenly there is a ruin or it turns it into a retirement home," Eckart explains today.

Finally, the Free State and the City of Munich accept an unlimited hereditary lease. The new location is sealed by a handshake with Prime Minister Horst Seehofer in February 2016. "As long as a highly cultural business takes place there, it can go on like this for the next 1000 years. Should the site ever return to us, then it will be flat and cleared, just as it will be handed over on 1 January 2018," Eckart explains the conditions. A 5300 square metre concert hall is now being built there, which will house two concert halls for 1800 and 600 listeners respectively and will serve as a base for the Hochschule für Musik und Theater. All proceeds from the lease of an estimated 0.6 million euros per year will flow into the cultural activities of the family company OTEC, which is committed to promoting the fine arts and clay arts on the site.

For Eckart, this is a win-win situation: "On the one hand, the Konzerthaus is an absolute upgrade for the entire region around the Ostbahnhof, and on the other it is a perfect symbiosis with all the other cultural institutions here in the Werksviertel". Eleven live stages, several studios and practice rooms for musicians and a generally creative audience shaped by the founder, media and gamer scene are already at home in the quarter. "The two large symphony orchestras of Munich are also behind the location. They see a great opportunity to break new musical ground here and to reach a younger audience," says the client.

In December 2016, the permit decision and the urban planning contract were signed. "The notary's appointment was also historic. The files were delivered by wheelbarrow, 40 people sat for 1.5 days reading the contracts," Eckart remembers with a smile.

It was a long way before Eckart was able to present to the public in January 2013 the concept for a new quarter in eastern Munich, which he had developed together with the six neighbours involved and the responsible authorities. The central message: the factory district will be uniquely diverse, very different from other homogeneous new development areas. It consists of one third each of the areas working, living and living. What is special about this is that the past of the industrial site, which was busy until 1993, remains perceptible through the old stock. After all, many industrial monuments must be preserved. Memories of the time when the Eckart family produced their Pfanni dumplings here, Zündapp mounted motorcycles, Konen sewed clothes and Optimol produced lubricating oil. But above all the cultural diversity that has settled there after this era remains an integral part: artist studios, stages and clubs - from subculture to high culture;

Now everything is going according to plan. The noise protection concept has been revised, a separate power plant for electricity, heat and cooling has started its trial operation at the beginning of this year, the winner of the architectural competition is expected to be announced in late summer, the shell of the directly adjacent buildings must be completed by the start of construction of the concert hall in June 2018. Their letting is already secured between 80 and 100 percent today.

It runs for Werner Eckart. "We are so far on schedule, the quarter is taking shape, and even the low interest rates and the current real estate boom are only playing into our hands. In fact, the site has become so attractive that we could raise rents by a good ten percent. And the rise in land prices in the city also has a positive effect on our financing."

The first building, Plant 3, has already been completed. "It was the riskiest project financially. 60 million euros had to be pre-financed. The existing building was raised from two to four floors and extended by a quarter. As a result, it now comprises 23500 square metres of floor space with a ceiling height of 4.5 metres. There were old debts, a cost-intensive construction of underground parking spaces and the renovation of old stock were imminent, and we could not yet calculate with income from pre-letting. In addition, we had to find good tenants, pioneers, who would move in with the prospect of another five years on the construction site and at best make the quarter attractive for other companies," says Eckart, describing the challenge. "Of course, a new building would have been more economical," he admits. "But only at first glance, perhaps, if the ecological costs for disposal, transport routes and energy consumption are not included. Our way in the overall balance was in any case more ecological, quite apart from the preservation of the flair by the old building fabric", sums up Eckart.

Meanwhile, the dominoes are falling as planned. More than 50 tenants of all sizes and from a wide variety of sectors have moved in since spring 2016: Above all Europe's largest event agency Avantgarde, a think tank of Allianz and Munich Re, but also 30 artists, an Augustiner-Bräu restaurant and nightclubs. 86 percent of the space is rented, the remaining shares remain deliberately vacant and will be given to suitable businesses to supply the future residents as soon as the other buildings are completed. The rental income in Plant 3 will then amount to five million euros per year. What was classified as the riskiest project at the start of construction is now a pound with which Eckart can grow.

"That's why we changed our thinking," says Eckart, explaining a strategic change. Originally, a separate company was to be established for each construction phase. Each GmbH would have been liable during the construction phase, before the finished object would be handed over to the Vermietungs GmbH of the main company OTEC. In this way, the risk for the entire project was to be reduced. "Basically, however, it was clear from the outset that a weakening GmbH project would always be absorbed by the other companies. After all, a 'sick' building would be neither beautiful nor beneficial to the entire ensemble." A recent risk analysis showed that Plant 3, with its broad tenancy base, would provide secure income to cover interest on future construction projects. "In addition, the upward trend in rental prices has so far been unbroken. Now we can save the administrative effort with the many individual companies."

At the same time, Eckart emphasizes that "we do not act in a way that optimizes rental prices". It is his central concern "to continue to demand attractive rents for all social classes, tradespeople and artists, so that the audience remains well mixed".

It seems that much of this billion euro project of the entrepreneur can no longer go wrong. "Our debt financing is fixed at one third for 20 years and one third for ten years. We gamble with the remaining third," laughs Eckart. "We have decided against taking out an insurance policy in the event of an increase in interest rates; instead, OTEC forms its own reserves. If there is no or only a small increase in interest rates, this reserve is used to repay the loans. The fact that the inflation rate is rising at the moment is another plus point: "My debts are - indirectly - decreasing as a result.

By 2022, around half of the factory district for which Werner Eckart is responsible will be completed. Then follow his last three commercially used construction projects. "We will save the construction of 600 apartments until the end. On the one hand, it doesn't work any different purely from structural logistics. On the other hand, the residential building rights opposite the bank are my most important jokers. If there's any liquidity risk, I can sell apartments. For my overall concept, the most important thing is that the Mitte works quarter remains in one hand," Eckart reveals.

He is looking forward to one highlight, which he likes to have for unusual ideas: "On the roof of Plant 3, at a height of around 25 metres, a ram, three sheep and two lambs will move into their new habitat this summer on 3500 square metres of pasture. And bees will keep them company. There will also be an alpine hut there." From there he looks down on his work, the Werksviertel;

Looking back, Werner Eckart recalls that the generation change in the family took place in good time. But it still wasn't easy. In 2009, there had been a more difficult phase when both Eckarts, father Otto and son Werner, briefly held management positions in the family business. The senior slowed down at the time, his reserves should not be risked with "daring projects", while the junior wanted to invest in a photovoltaic system. The plan failed, the frustration about it is still a little noticeable today: "I asked him, the 73-year-old, when was the right time to transfer responsibility to me. How old is he to be mine?" The father's answer was succinct: "130." The conversation was over.

But a thought process was initiated. From Werner Eckart's experience, it is important "that there are no two cooks - generally when managing a company, but especially when a generation lies in between. It is in the nature of things that people in old age tend to have a short-term view and become a concern. The younger one, on the other hand, usually deals with longer-term planning and perspectives."

Otto Eckart will retire in 2009, is still an official member of the Supervisory Board and has the right to information. "But he didn't make use of it any more when he realized how positively everything was developing. He only came to the office for pleasure and was amazed," explains his son today.

The handover was then carried out consistently. "Including the job of chief office I moved into. A big step for a person who was used to deciding and directing", he emphasizes with noticeable great respect.

Succession is, on the one hand, the responsibility of the young generation. "But it is elementary to stay in touch and to maintain and cultivate the mutual interest in each other. Interestingly, our entrepreneurial characters are similar over generations, so there is always a basic understanding".

Otto Eckart dies in June 2016. "Now it's me," the 49-year-old son adds, almost unbelievingly: "I've been writing my will for two years and I'm facing the same questions as my forefathers."

Opinionleader Christian Klein 31
With its rules on taxonomy, the EU will initiate…

How to earn it Cornelia Knust 32
Expansion. The Thannhuber family of entrepreneurs…

How to earn it Klaus Meitinger 26
Innovation. The only effective climate protection…