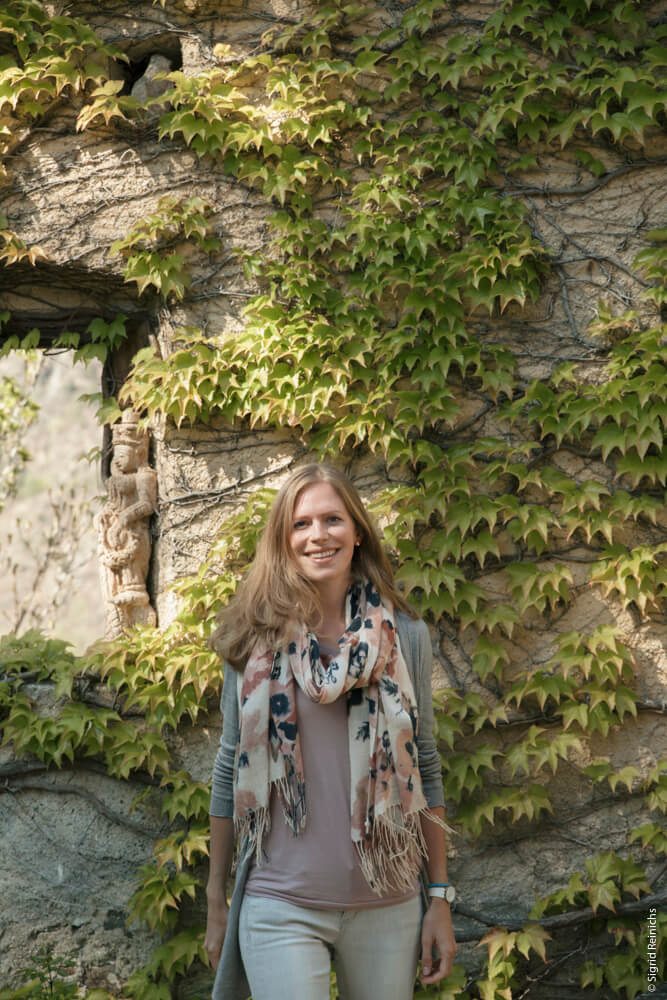 A Saturday afternoon at Schloss Juval, the summer residence of the Messner family in the South Tyrolean Vinschgau: a large group of visitors is waiting in front of the gate. They have all booked a special evening with Reinhold Messner: private guided tour of the castle and museum, small wine tasting with grape juice from our own cultivation, followed by a lecture and four-course meal with the host.

Such events mean additional work for the Messners. While his father explains the story of Juval to his fans in front of the goal, his daughter Magdalena makes final preparations inside. She speaks alternately German and Italian into her mobile phone, gives instructions. It's a little hectic.

A reporter team that lets a loud and annoying drone rise asks her to bring the thing from heaven now. She says it nicely, but definitely. When the two people she spoke to do not react, she says it again, not quite so friendly any more. Meanwhile the Messner fans make Selfies with their hero. Only a few people know that the real boss here is Magdalena. You don't even recognize her.

The daughter can live with that. Her father is still the most important draught horse, her draught horse. He washes money into the coffers of Messner Mountain Museum GmbH (MMM). The company she has headed since the beginning of 2017 and of which she is now the majority shareholder. "My parents," she says, "hold only small shares."

If you don't know Magdalena Messner and meet her for the first time, you will be pleasantly surprised by her openness even when it comes to sensitive questions. And anyone who thought that "Gröbaz", the greatest mountaineer of all time, considered himself immortal and therefore refused to engage in dialogue about the future of his empire of museums, books, relics and real estate, was also mistaken. Instead, the impression is created: a family business approaches the critical questions of future and heritage very openly and pragmatically, without any taboos.

Magdalena Messner explains that this is connected with his father's job, which used to be quite dangerous: "When he went on an expedition, I always knew where his last will and testament was. My mother also urged him to update this from time to time." Mama, the textile designer Sabine Stehle, wears her trousers at home. Often not just the last word, but the only word.

Magdalena calls her "a strong character, a down-to-earth, self-contained woman, more fond of practical work than her father. It wouldn't work otherwise." On the one hand, she cooks fruit from her own gardens, but at the same time she is also the family's financial manager - "Mama is the one who takes care of the money at home. Without them, my father would never have been able to lift the museums." Reinhold Messner has often stressed that he understands very little about money matters.

It was a logical decision that Magdalena, one of three children whom Reinhold Messner has with Sabine Stehle, now manages the six MMM and became the boss of a good 20 employees. Little sister Anna Judith, 15, is still at school. And Brother Simon, 26, has a different specialty. He just finished his biology studies in Innsbruck.

Magdalena Messner, on the other hand, has long since "crept" into her current role. As a teenager she had typed her father's handwritten, difficult to read manuscripts. She, who is not enthusiastic about extreme climbing and does not like to torture herself in thin air, learned a lot about mountaineering and its history. She also studied economics and art history in Vienna and Rome - two subjects that she now needs very much. She also speaks three languages fluently and practised dealing with prominent people at an early age. They were often guests at Messners, from artists and politicians to managers such as Wolfgang Reitzle and Jürgen Schrempp.

As head of MMM, Magdalena has set herself two big goals: The museums should be economically successful. And she wants to set her own artistic accents.

To flourish as a company - for them this means not being dependent on subsidies. The MMM are the only cultural enterprise in South Tyrol that has supported itself from the very beginning: "We have never received money from the province, the state or the EU. That's a nice feeling and I want it to stay that way."

However, this statement only refers to operations. The development and construction costs for the entire project are estimated at up to 30 million euros. These were divided between Messner, the Province of South Tyrol and private investors. The latter financed, for example, the extension of the old walls and also the new MMM Corones by Zaha Hadid. In return, the Messner family had to maintain the exhibitions for several decades without subsidies.

Only Juval Castle and the Ortles Glacier World properties belong to Messner himself, including the museums. For the Firmian Centre (Bolzano) and the three other satellites Dolomites, Ripa and Corones, however, there are long-term lease agreements with MMM GmbH. The restoration of the former fort on Monte Rite (MMM Dolomites) was carried out by the Veneto Region together with the municipality of Pieve di Cadore. For the renovation and design of MMM Ripa, 80 percent of the costs were borne by the Province of South Tyrol in order to help the community of Bruneck financially.

The company itself is registered as a commercial enterprise, explains Magdalena. "It raises complex tax and insurance issues." Many of the objects on display in the museums come from Reinhold Messner's private collection, so from a legal point of view they are valuable but free loans to the MMM. In addition there are gifts, purchases and loans from third parties. She worked her way into these topics for almost three years before becoming administrator at the beginning of 2017. Your friend is a lawyer, which is also helpful. Magdalena says, "This all only works if we function as a family."

Now she has to see that she attracts visitors to the museums. Almost 200000 were in 2016: "The initial hype has been over for quite some time, the numbers have normalized. The art now is to maintain the level." In other words, your task becomes more difficult than easier.

In order to master the challenge, she is already setting her own artistic accents - even though art and mountain, Magdalena and Reinhold, sometimes collide in the museums. "Some things I find too condensed, which may overwhelm the visitors. We still have to make some changes," the daughter announces. As a rule, Mr Papa is then also persuaded to change his mind. However, it took almost two years before she was able to get him enthusiastic about a multimedia and audio guide. She could have done it without him. But she wanted him to discuss the guide: "His voice is important after all."

In the beginning she had been worried that there might be too few tasks as administrator. Today she says, "A beautiful illusion." So she's glad she doesn't have her father's whole empire on her hands. He still looks after his book projects and rights as well as the films himself together with his long-time personal assistant Ruth Ennemoser.

This also applies to the three mountain farms that Messner has leased out. He does not want to make a profit, but he does want the farms to be managed sustainably and biologically by the tenants - and therefore gives them the guidelines.

Messner has often stressed that each of the three children he has together with Sabine Stehle should have a farm. Magdalena says, "I don't need anyone and I'm not interested in agriculture either." Unterortl, the farm with the vineyard, had already been handed over to her brother Simon, who was also an excellent climber. But he does not hang this on the big bell so as not to be compared with the father all the time.

The leased farm shop in Vinschgau at the foot of Juval still belongs to Papa, Magdalena says. As well as the "Yak & Yeti", inn and tourist hostel in Sulden am Ortler, with its own yak herd. The apartment in Munich's Klenzestraße?

"We all have a key, that's our common base camp in the city, for example before and after long distance travel." It is more complicated to find a solution for her father's foundation, the Messner Mountain Foundation. Because it would be difficult to inherit, the father wanted to dissolve it in the medium term. "Until then, however, there will still be some useful projects, for example for the earthquake victims in Nepal together with the Hillary Foundation."

There's no question about it: someone is actually thinking about the time after him. Messner's most valuable possession is Schloss Juval, which he bought in 1983 - against the advice of a few friends - for the equivalent of only 30000 euros, and which is probably worth ten million euros today.

Juval is the summer residence of the family. The property itself - like the Ortles Glacier World area - is not part of Museums GmbH. Magdalena Messner can only dispose of the exhibits. These, however, have it in them. Juval also houses the alpine history library of Reinhold Messner. It is probably the largest private collection of its kind in the world and, in addition to numerous original editions, contains many valuable watercolours whose value cannot be reliably estimated.

Messner doesn't know exactly how Juval and his Mount Everest from books will be continued: "The collection was supposed to remain part of the museum after my death. But I can't bequeath Juval to a single one of my children either. We'll see."

Magdalena Messner also wants to take her time to grow into her new role. In June she moved from Merano to a house built in the rock on Juval. From there it commutes daily to Bolzano, where the headquarters of the company are located in the Mountain Museum Firmian. If she has the opportunity, she visits other museums. For example, the Ötzi Museum in Bolzano and the Trautmannsdorf Gardens in Merano. "I'll look around and see what they do good or different. "The way they run their museum shop, the ticket prices stagger.

She says she wants to keep her openness, her curiosity about other cultures and people. But she also knows that as the boss of her new empire she has to draw boundaries and sometimes make unpleasant decisions. "It's hard for me to be hard," she admits. "I take many things personally, but I see my empathy as a plus. And so far, there have been no major breaches of trust." She was there like her father, who - what many didn't know - could be taken advantage of and could be very generous.

Magdalena Messner knows: "The big tests are yet to come. The 72-year-old Reinhold Messner is still well, she can always ask him for advice. Once he is gone, she will miss him as a father, but also as a sparring partner.

And: At some point the lease agreements with the Province of South Tyrol will expire, they will then have to be renegotiated. She and her siblings get older, they have to think about what will happen to Castle Juval. And someone has to take care of the father's book rights, some of them world bestsellers.

There's a lot for the young woman to do. But to squeeze in front of a mountain, even if it is a mountain of tasks, has never been the way of the Messners.