Two of the same wood. 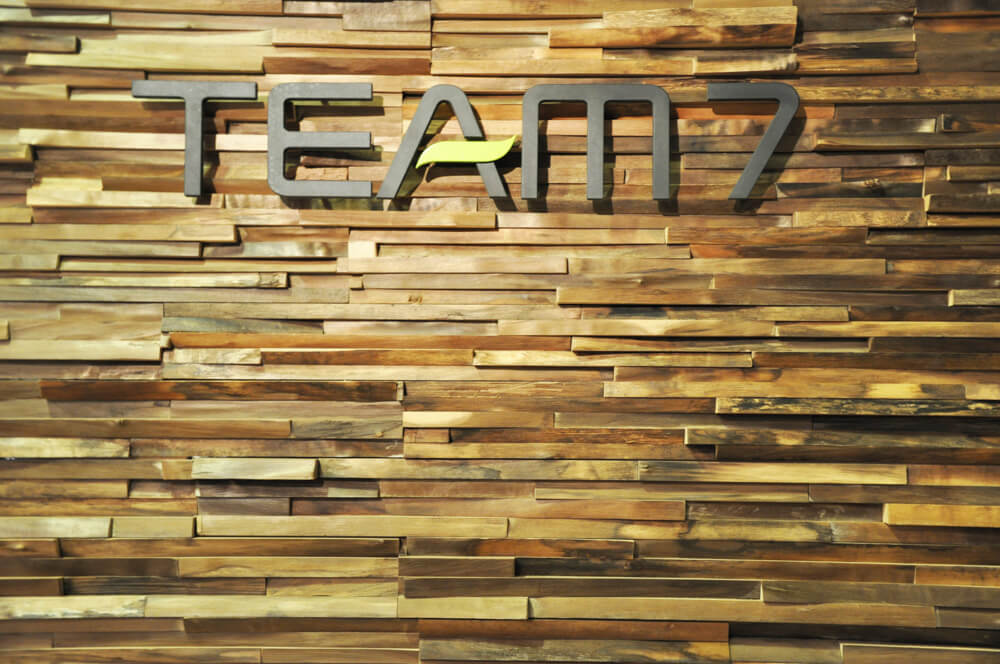 Suddenly it breaks out of Georg Emprechtinger. "You want to sell me the company, I want to buy it from you, and we both can't do it." "Because you can't pay me enough", Erwin Berghammer replied, "at this moment 13 years ago the history of the Austrian furniture maker Team 7 could have come to an end;

1959 Berghammer had founded a joinery in the wooded Innviertel. In 1965 he gave her the euphonious name Team 7. Furniture is what everyone makes, he thought. But only if it is possible to establish a brand would the products become something very special. Otherwise it would just be "like a uniform blue suit, as it used to be in China," explains Georg Emprechtinger.

In the study of the founder - today it is the office of the successor - there is still the built-in cupboard made of light alder wood with which Berghammer wanted to break through the world of blue suits. For a long time he - like his competitors - had only produced sanded lacquer furniture. Then Berghammer decided: "Out with the chipboard, out with the paint shop, full concentration on pure natural wood." "Opus 1" is what the founder called this closet. It is his entrance into the ecological furniture production.

At the Cologne furniture fair in 1982 Berghammer appeared with a grain mill. The smell runs through the whole hall, signals: "Team 7 is something completely different."

But in the beginning nobody wants to buy the wooden furniture which is only inlaid with oil. Although some retailers jump on the slogan "organic furniture", sales are very limited in the first few years. "The positioning was very pointed, very radical," Emprechtinger judges. A single product. If such a positioning doesn't work, the business dies. But if it opens, the company is in a very, very strong position. At first the "pointed" positioning also works. But from the mid-1990s Team 7 beim Umsatz recorded a decline of almost ten million euros to less than 30 million euros.

The company employs 300 people during this time. The company is increasingly dependent on outside capital. "After Opus 1, there was no product that would have hit the market as hard as Opus 1," explains Emprechtinger.

At the end of the 1990s, Erwin Berghammer was looking for a manager to restructure the company. Georg Emprechtinger is building a house at this moment. His neighbor: Erwin Berghammer. "By chance, if you know what I mean, it's up to you."

Over the garden fence the two wooden boys get closer. Emprechtinger worked for the Austrian company tilo Holzfußböden, among others, after studying law and business administration and earning an MBA. As Berghammer not only brings into play the managing director's activity, but also the possibility of a company participation, Emprechtinger bites the bait. "That was the sticking point for me, because my goal was always to become an entrepreneur." Why? "It's probably in the genes," says the son of a sawmill owner.

In 1999 Emprechtinger not only took over Berghammer's office with Opus 1, but also its tasks. He closes an unprofitable kitchen factory in Styria, sacks 50 people and breathes new life into the pure eco-label with a change of strategy. The slogan is now "design meets nature". Berghammer, as owner and supervisory board member, must support the restructuring steps. Because without them, "the company couldn't have gotten off the ground."

The change in strategy also meant that other materials could be used. Not only wood, but also coloured glass or steel. In the past, Emprechtinger says, this was unthinkable for a pure wood processor. Where even the drawers of the kitchen cupboards were made of wood. "To move a full drawer, you must have been at the gym before."

Now Team 7 customers can find common aluminium drawer pull-outs, fashionably designed furniture and furniture with coloured glass fronts. As customers, he still had the "eco-dealers" with the sweaters he knitted himself, but also increasingly the "interior designers boys in black suits", for whom the products used to be too eco-friendly.

Another novelty: Team 7 now only produces to order. No more series, no more stock. Only individual pieces of furniture, accurate to the millimetre. "Commission-based manufacturing is more expensive than mass production." However, it also appeals to a more affluent clientele.

This approach works. Sales stabilized in 2001 and 2002, and even "cautious growth" of one to two percent can be achieved. Meanwhile, Emprechtinger is always bringing the topic of participation to the table. Although there is "a loose agreement" that he should take over the company once, there is no clear timetable as to how and when this should happen.

Since 2001, both sides have been involved as auditors, lawyers and a foundation board member. Because the founder's company shares are in a foundation. Variants from venture capital to an earn-out are discussed. Earn-out means that company shares are sold at a base price plus a fixed additional purchase price component. This additional purchase price is due later. The amount depends on how successful the company will be in the market in the future.

Georg Emprechtinger had an unpleasant feeling: "They make me pay again for my work." The better he would work, the more expensive it would be for him to buy. It takes months to work out the scenario. Only to find out, "That's not possible anyway. We've run aground in this time."

In retrospect, the entrepreneur says, there is probably no "tailor-made solution" in such a process. Advisors are necessary, but the deal is made "by the buyer and the seller in person". For some it is a matter of a lifetime's work, for others it is a matter of the risks of an entrepreneurial future.

In 2003, the search process shifted towards external interested parties. Emprechtinger's dream of entrepreneurship seems to be coming to an end. Nevertheless, he accompanies the purchase negotiations for one year. "It's hard to sell without a manager."

When the sales negotiations became concrete in 2004, this memorable meeting took place. Berghammer visits Emprechtinger in his office. The two of them drink coffee, chat about trifles. Until it breaks out of Emprechtinger: "You want to sell me the company, I want to buy it from you, and we both can't do it." "Because you can't pay me enough."

And then suddenly it happens really fast. Founder and successor agree on a procedure this afternoon. Emprechtinger gets 49 percent immediately, Berghammer remains majority owner. In addition, the deal provides for an option for Emprechtinger, who must, however, accept a termination block. Within five years he can buy the remaining 51 percent at a price that brings the founder the originally desired total purchase price.

However, the buyer is aware that the business must run for this. In 2006, Team 7 actually made a plus of 40 percent. The knot opens, it was like "in the lift to the top".

Georg Emprechtinger pulls out the option and realizes his dream of entrepreneurship. Now the measures that he has already decided as managing director are taking effect. The focus on design pays off, the products from the Innviertel fetch one price after the other. Design-savvy buyers are now also turning to solid wood furniture from Austria. And not only that works. The model of the steel textile cantilever chair Magnum - reinterpreted by the design team - has had 50000 sales since 2005. With the help of a selective distribution system, including the company's own shops, the brand's awareness is considerably increased, especially abroad.

Today, up to 1000 commissions per week are produced from the high-priced products. For example, an oak pull-out table costs around 2900 euros, a beech kitchen with electrical appliances from Miele and Bora almost 38000 euros. In 2016, growth will amount to almost six percent.

By way of comparison: German home furniture manufacturers made a plus of two percent in 2016, kitchen manufacturers four percent. Team 7 is active in both segments. And more recently, through a cooperation with bathroom supplier Keuco, also in the bathroom segment. The manufacturer from the Innviertel supplies the bathroom furniture made of Venice Oak. Venice Oak is a wood sawn from the former piles of the Venice Lagoon and bears the traces of the marine animals that once settled on it.

The most commonly used type of wood is alder, just like in the early days. The special thing about this type of wood, which was once only used as firewood, is that it grows again within 30 years. An oak needs 85 years. Team 7 obtains a large part of its timber from Hungary and Poland; for five years they have also owned 74 hectares of their own sustainably managed forest.

The furniture is distributed worldwide. Almost half goes to Germany and Italy, followed by Switzerland and the Benelux countries. The USA, Russia and China are the fastest-growing markets outside Europe. With shops in Mumbai, Tokyo, Taiwan and Beijing, Emprechtinger serves the desire of wealthy city dwellers for Austrian naturalness.

The entrepreneur would also like to generate future growth through acquisitions. Both a wood-processing company and another brand could be considered. Another important topic is the reduction of the high production costs that arise during individual production. Keyword Industry 4.0. "We invest a lot of energy and money in the digitization processes of production," says Emprechtinger. A whole squad of young software developers are busy in the company with nothing other than optimising the processes.

The father of a son and a daughter has also already thought about the subject of succession: His son, 26, is to become the wooden lad in the Innviertel. 100 percent. Because only then is being an entrepreneur really desirable. "If it's possible to do one's own thing completely." ®