Put that old iron away. 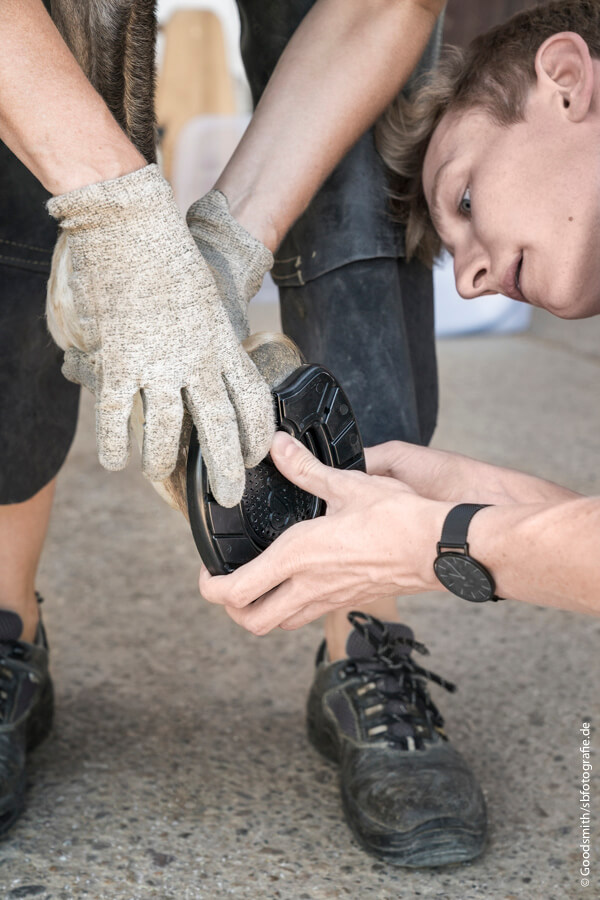 Start-up. Horses have been shoed with horseshoes for more than 1000 years - in the age of high technology this alone is a little anachronistic. In fact, it even damages the health of the horses. A team of young founders - all of them no riders themselves - has now developed an alternative.

Innovations often come about by chance. Bennet Klein and Simon Salowsky, two developers from the 3D printing industry, founded Trindo Digitalmanufaktur GmbH in 2013 and turned it into a service and product development company for innovative 3D printing production technology. They had nothing to do with horses until then.

At a dinner together a friend, herself an enthusiastic rider, described her grief. Her horse had hoof problems again and again, caused by the irons, which are hammered into the hoof with six long nails. For the animal, Klein and Salowsky learned to walk barefoot, even if it was the healthiest way. But because of the additional loads on asphalt and gravel roads or the weight of the rider, hoof protection is absolutely necessary.

The problem: The holes caused by the nails are entry ports for bacteria and fungi. The friend wanted to know whether it would not be possible to print something similar out of plastic, a kind of shoe that would only be worn if the horse had to walk on problematic surfaces.

At first, the two of them were astonished at the fact that horses today still use a technology that was developed by the Romans about 1500 years ago and has not been changed since. They also asked horse lovers and veterinarians about other risks and side effects and found that the rigid iron also disables the shock absorption of the hooves because it prevents the hoof from absorbing any unevenness. Therefore, all impacts are transferred directly to tendons and joints. Blood circulation in the legs is also impaired.

Suddenly it became clear to the entrepreneurs why there is now a "bare hoof" movement and why more and more professions and products have been created around the horse's hoof: Hoof carers, hoof workers, hoof healers and hoof orthopaedists as well as more than 30 manufacturers of about 100 different hoof protection products. Everyone knows the problem, everyone recommends a different product, but nothing works properly.

"Previous attempts to design removable hoof shoes," explains Salowsky, "have failed due to excessively rapid material wear and a lack of elasticity. They are difficult to put on and take off, they never fit perfectly, twist during use, and the locking systems rub against the horse's leg. Some suppliers also use harmful, aggressive adhesives. Even the best, very high-priced product to date has no elastic decoupling, must be reattached after four weeks at the latest and has a hinge, a distinct weak point. It was clear that we had to rethink the concept thoroughly and completely." 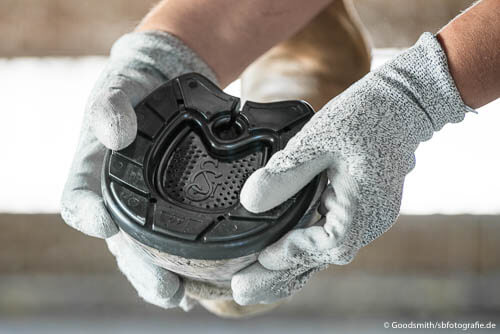 "We liked the idea of creating a temporary connection that would contain rigid and flexible elements," Klein adds. "The product should really only be worn when it is needed and should therefore be easy to attach and remove. With these requirements in mind, we started developing and testing prototypes."

The result is the "Goodsmith" hoof protection. A hoof worker first adapts it individually to each horse's hoof, taking into account the shape of the hoof and any deformities. The riders can then clip on the hoof protection themselves in seconds using the Velcro system and ride off. Removal is just as quick. Depending on use, initial prototypes held up to 800 hours under laboratory conditions.

Currently a second test phase has started to test 100 hooves for 100 days and to make further technical adjustments if necessary.

"The advantage for the horse is clearly the mobility of the hoof", explains Salowsky: "The technical magic word is elastic decoupling. Elastomers are located on the lugs to absorb load peaks. We also use materials from industry: carbon, high-performance polymers and Velcro. Carbon is flexible and extremely light. It is able to support the natural hoof movements. So the hoof mechanism works again as in the wild."

The special abrasion layer consists of a plastic material in which the abrasion takes place only very slowly. "An average rider can use our product for about a year," he promises. An additional advantage is that the Goodsmith hoof protection can even take over orthopaedic functions if required, for example in the case of a malformation of the hooves.

Riders are quickly convinced of the idea of the two. But can it also be used to earn money? Won't the product encounter massive resistance from the classic farriery? "That wasn't the case at all," says Klein. "The blacksmiths themselves are increasingly sceptical of the old horseshoe. You can see that many riders switch to other products and no longer want their horses ironed up. Our technology is therefore a real alternative for them. The blacksmiths act as resellers and adapt Goodsmith before the first use. They don't earn much on the horseshoes: the iron costs around two euros to buy and about four to five euros to sell. Our product, on the other hand, offers them significantly more commission at a sales price of around 90 euros." 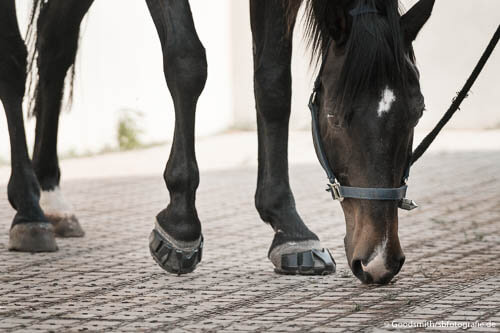 Where they initially suspected hard resistance, the founders found such an attractive sales channel. But the two are also "digital natives", consistent users of the Internet since their youth. They therefore use all online media as distribution channels. "There'll be an app," says Klein. "And the site will be called good-smith.com. In addition, we are designing a blog called hufglueck.de, on which several horse specialists and professional riders will write. They will pick up a broad spectrum of topics and thus create a kind of online magazine for riders. We are also planning influencer marketing via YouTube, Facebook and Instagram. And as a brand ambassador there is a rider with a film horse on board who already has several 10000 followers in important social media channels today."

One of several interesting partnerships has already been planned. "We have good contacts to the company Geschenke24.de and will therefore soon be able to have our product refined in design, for example with Swarovski stones. The Goodsmith can also be produced in any desired colour, matching the saddle blanket or the coat colour. The materials allow a strong individualization."

In order to take the next step, the company is now looking for investors. "We need 600,000 euros to push marketing and sales and to be able to pre-finance production. For this we would offer a share of ten percent. This corresponds to a company valuation of six million euros."

With this financial injection, the entrepreneurs want to reach break-even. This does not seem impossible. There are currently 1.2 million horses in Germany. The turnover in the hoof industry amounts to about five billion euros per year. "Even with a market share of 0.5 percent in the German-speaking region, we would reach the break-even point," Klein calculates: "That would be 5,000 to 7,500 horses equipped with our products." It had to be: "We already have a giant influx."