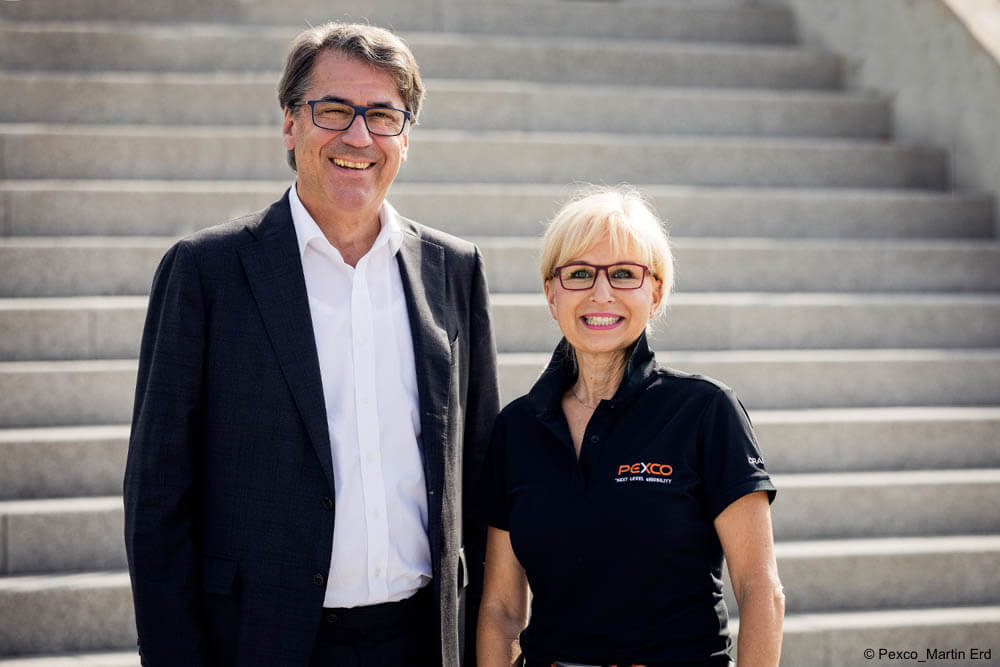 Reestablishment. What does a family entrepreneur do when she has sold her father's company and has to realize that her influence as a manager is also dwindling? Susanne Puello (above) pulls the rip cord, looks for a strategic partner at mit Stefan Pierer and founds a new company in the traditional area. With Pexco GmbH she wants to shuffle up the world of e-bikes once again.

The news in March 2017 was a drumbeat: Susanne Puello, long-time managing director of the Winora Group from Sennfeld in the Lower Franconian district of Schweinfurt, is leaving her baby - the company founded by her great-grandfather Engelbert Wiener in 1921. "Until the end, the Winora Group was characterised by the charm of a family business, characterised by close relationships with specialist retailers, suppliers and suppliers. From today, however, I'll be looking for new challenges," commented Puello on her departure - it was noticeable that this step was not easy for her.

It is the temporary end of an entrepreneurial roller coaster ride with ups and downs. But at the same time also a new beginning.

For decades, Winora had only gone uphill. Bernd Seuffert, the grandson of the company's founder, had taken over the company in 1956, which at that time already produced around 6000 bicycles per year. In 1963 the first Winora bicycle factory with assembly line system started in Schweinfurt. That was considered extremely innovative at the time.

In order to meet the increasing demand, triggered by the oil crisis and growing health awareness, the company built a new production facility at the beginning of the 1980s and took over Staiger (Stuttgart) in 1988.

At some point, however, the product range became confusing. When an important trend, the rise of mountain bikes, was overslept, the company got into trouble. Seuffert looked for a partner and joined the Derby Cycle Corporation (Cloppenburg), which is backed by another German bicycle family company - Kalkhoff. However, the hoped-for synergies largely failed to materialise and the two companies apparently did not fit together.

In this phase Susanne Puello takes over the management, great-granddaughter of the founder Engelbert Wiener and daughter of Bernd Seuffert. It focuses more on the sale of parts and thus creates a turnaround. However, it quickly becomes clear that Winora cannot master this feat alone. When buying parts that are dominated by the top dogs Sram and Shimano, size is important. More units means more room for manoeuvre in the tough negotiations about the price of circuits or brake systems.

In 2001, the company therefore moved to the Dutch Accell Group, one of the major players in the global bicycle business. Winora invests, in 2005 it founds its own component brand XLC International with an integrated shop-in-shop concept for the specialist trade - and is successful.

It also runs smoothly again because Susanne Puello has found a committed comrade-in-arms in her husband Felix. The two become pioneers of e-mobility in bicycles, introducing the world's first integrated T-shape e-bike battery in 2007. Under the umbrella of Winora, they founded the Haibike brand, which presented the first e-mountain bike in 2010 and later even became the market leader for e-bikes.

One basic problem, however, remains: The Puellos were no longer the boss of their own house. The influence of the founders had gradually diminished, especially when it came to budgets for research and development. Accell's best-known brands include Ghost from Germany, Lapierre from France and Raleigh and Diamondback from Great Britain - direct competitors of Winora. "There were differences with Accell," Puello admitted after her departure. The family entrepreneur without a family business was looking for a new home.

At first Susanne Puello considers taking over the insolvent Mitteldeutsche Fahrradwerke Mifa in Sangerhausen. After "weighing all commercial aspects", however, she withdraws there. But the respite should not last long. Already in July 2017, Pexco GmbH is founded, a bicycle company that focuses - not surprisingly - on electric mobility. The name stands for "Puello eMobility Crossover Company".

What attracts the attention of the scene is not only the name of the founding family, but also the strategic partner of the Puello couple. With a minority share on board, the listed KTM Industries AG, Europe's largest motorcycle manufacturer according to its own information, is the world market leader for sporty electric motorcycles and a supplier to the automotive industry.

Under their roof are brands such as KTM, Husqvarna Motorcycles, > Pankl Racing and fork manufacturer WP. With Stefan Pierer, the managing director of KTM Industries AG, the Puellos think they have found the perfect partner. "We didn't know each other before. The contact came through our design office," says Susanne Puello. "Already at the first meeting we found many similarities and intersections. The topic of e-mobility is moving ever closer together for motorcycles, cars and bicycles. That creates a lot of synergies."

The designer, who exceptionally worked here as a "marriage broker", is also on board: industry specialist Alex Thusbass will be the external consultant responsible for innovation, brand management and digital retailing. He had already played a major role in the success of Haibike's first e-mountain bike. Part of the Pexco network is also Kiska, Europe's largest independent and owner-managed design company, which employs around 240 people in Salzburg.

Pierer, the Puellos, the Kiska crew and Thusbass share a common vision: "We want to become the technology leader for emission-free lightweight vehicles and, together with the international bicycle trade, set off the next level of e-mobility," says Susanne Puello. The strategic partnership covers all areas - from development and design to the manufacture of e-bikes and conventional bikes.

The start-up will be based in the Schweinfurt harbour area, just a stone's throw from the Winora site. However, there should be no products with the Pexco label. The three bike and e-bike brands under the new roof will be Raymon, Husqvarna and R2R (for Ready to Race). Raymon will initially be positioned as a rather inexpensive specialist brand with a classic bicycle portfolio (mountain bikes, trekking bikes, children's and youth bikes). E-bikes will be added later.

The already existing KTM brand Husqvarna, which has Swedish roots and formerly belonged to BMW, is all about e-mobility for any surface. The "Urban" and "Exploration" e-bike product lines are to be offered in a reduced design and rely on modern materials and production technologies.

The new brand R2R focuses on enduro and downhill bikes as well as e-bikes for off-road use. Here, in the high-end and high-tech segment, there will be the strongest links to KTM and its comprehensive motorsport expertise. The first R2R models will be presented at Eurobike 2018 in July next year.

The wheels are manufactured and assembled in existing plants in Bulgaria and Taiwan. Production has already started. Puello currently sees the prompt procurement of supplier parts as a challenge. "Due to the e-bike boom, there are bottlenecks at motor and battery suppliers." At Pexco, the first step will be to install Bosch electric motors, with further suppliers to follow. The construction of its own engines and electricity storage facilities is not planned.

Pexco initially wants to serve the DACH market, then from 2019 the whole of Europe. "The USA will follow in a third step," announces Puello. "We already had success there with Haibike. In North America, the e-bike age is yet to come."

Other market observers are more sceptical. Many urban centres in the USA are simply unsuitable and too dangerous for cycling. And the triumphal march of the E-Mountainbikes in the USA will not take place because motorized vehicles are generally forbidden on many trails.

Puello does not want to name concrete targets for sales. Yes, there is a business plan, but she keeps its key data to herself. The same applies to the level of financial commitment of their family as majority shareholders. Beside her husband also daughter Christina belongs to the team.

The three of them firmly believe that the market for e-bikes will continue to grow despite the current boom. And there is enough space for a company whose makers have already shown with Haibike that they are able to read the market. "Without the Haibike, the e-bike wouldn't be where it is now," Puello makes clear. "Urban electric bikes still have a lot of potential, they just have to be sportier and more functional. The diesel scandal helps us of course. We can win new customers who don't even know they need an e-bike yet. We have to create target groups, not search."

The ex-Winora boss is convinced that e-mobility will continue to develop and diversify very rapidly: "There will be mixed forms of vehicles with two or more wheels in the future". She is sceptical about the market for e-mountainbikes: "Many players are already crowding the market."

When it comes to distribution, Pexco wants to rely on the classic specialist trade. "The response of dealers to our project at the leading Eurobike trade fair was overwhelming," says Puello. "We look forward to working with old acquaintances." An almost pure direct selling, on which for example Canyon and rose set, is no option, because the product E-Bike is too complex and explanation-needy. But: "Of course we see the digital change and adjust to it." Above all, communication with customers will change rapidly.

And what can KTM Industris AG contribute to the success of the mammoth start-up? "With the full vehicle manufacturer KTM, we gain access to completely new technologies and resources," believes Puello. KTM CEO Pierer, boss of 2500 employees, also does not spare any praise, as is customary with mergers and acquisitions in the honeymoon phase: "Despite all similarities to the motorcycle market, the bicycle industry follows its own rules. These can of course be analysed, but that takes time and resources. Bringing people like the Puello family on board, who have decades of experience with the actors and mechanisms, is a decisive advantage for us".

The bicycle industry will follow Pexco's beginnings with great interest. The Puellos have a reputation to lose. KTM too. Especially Stefan Pierer. When KTM acquired the company at the end of 1991, the traditional motorcycle and bicycle manufacturer from Mattighofen in Upper Austria was on the verge of collapse. But within 25 years Pierer turned the economic total loss into the largest European motorcycle manufacturer before BMW. Now Susanne Puello and Stefan Pierer can once again prove their entrepreneurial qualities.