"We're where something's going on." 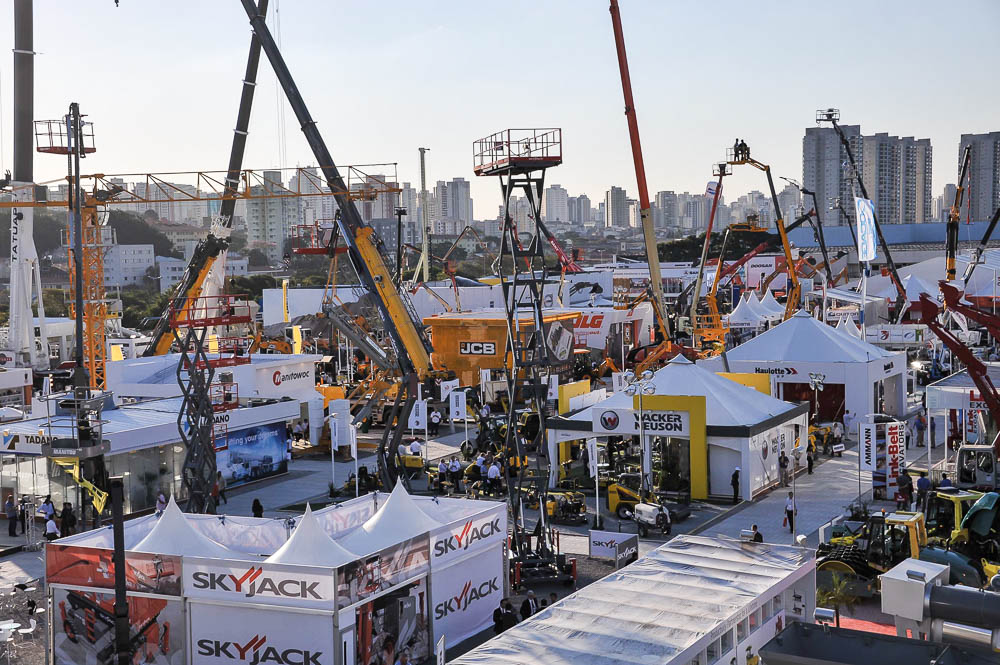 Network. In June 2018, M&T Expo Brazil, the largest construction machinery exhibition on the Latin American continent, will take place for the first time with the participation of Messe München. "This is an important step for us - we want to help shape the leading trade fairs at diesem Kontinent," says Stefan Rummel, Managing Director of Messe München. The LIDE business network can help here.

"Now it's getting really serious," Stefan Rummel takes a breath: "Latin America and the most important market there, Brazil, have so far been white spots on our map. This is finally over." According to the managing director of Messe München, industrial companies are globally active and present their products at trade fairs. "We want to be the ones to organize this worldwide."

Preparations for this event are already well advanced when Stefan Rummel visits Christian Hirmer at his stand at the ExpoReal in Munich in October 2016. The Hirmer Group has been represented at the trade fair with its real estate commitments since 2011, "and of course I always pass by to say hello and exchange news," says Rummel.

Almost incidentally, the two of them talk about Brazil. Christian Hirmer raves about his experience when he entered the Brazilian market and about the construction of Campo Bahia, which was to become legendary as the accommodation for the German national team during the 2014 FIFA World Cup in Brazil. And he reports on the LIDE business network, of which he is chairman today in Germany and which offered him "invaluable" support at the time.

Stefan Rummel talks about the joint venture with the Brazilian construction machinery association. And of the challenges he faced at beim Markteintritt "The direct nature of the Germans is not well received in Brazil," he laughs. Before every business talk there is an intensive small talk. Several extensive meals and the integration of the family also belong to the business initiation.

"In Brazil, it's always about trust and a good personal level so that business comes to a successful conclusion - that's something we first had to learn. With LIDE at our side, we might have saved ourselves a lot of trouble."

The conversation quickly makes it clear: LIDE and Messe München have the same goal. Both bring people together so that they can advance each other. And are expanding strongly in the process.

53 years after the trade fair was founded as a regional meeting place for entrepreneurs, Rummel now organises its own 50 trade fairs, looks after over 50000 exhibitors and around three million visitors every year.

14 years after LIDE was founded by the entrepreneur João Doria, the network connects over 2000 companies in 20 countries on five continents. In addition to top international companies such as Siemens, Coca-Cola, VW and BMW, German SMEs are also intensively active in the network. "That fits," meint Stefan carnival.

Still in November 2016 he meets the managing director of LIDE in Germany, Fabiana Oscari-Bergs, and discusses with her the modalities of a membership. "A month later, we had already joined."

Although he can no longer use LIDE's concrete recommendations when selecting experienced lawyers and consultants for den Markteintritt in Brazil, Rummel sees above all the long-term perspective of this cooperation: "Our goal is to export all our major trade fairs and topics that we have in Munich to Brazil. We will then be able to access the LIDE network in the future. I expect this to happen in front of allem Unterstützung in the overflowing Brazilian bureaucracy jungle and in penetrating the inconsistent tax laws. Das is a huge opportunity for us."

Brazil should also benefit. Figures from Germany show what a trade fair can move. According to a study conducted by the ifo Institute in 2014, Messe München secures almost 25,000 jobs in the Bavarian state capital through its activities alone. Exhibitors and visitors generate an annual bundesweiten Umsatz of 2.63 Milliarden Euro and a tax revenue of 490 million euros.

A similar push would be just right in Brazil. After the deep recession of 2016 and the hesitant stabilization in the past twelve months, the economists of the International Monetary Fund expect positive growth rates of 1.9 and 2.1 percent again in the next two years. Private consumer spending and investments - especially in the construction sector - are expected to be the drivers.

It is therefore quite logical that the M&T Expo construction machinery trade fair in June of this year will be the starting point for Rummel's Brazilian expansion. "Brazil is the last country in the up-and-coming BRIC states that we are not yet supplying with a trade fair. The experiences in China and India show us how strong the demand for construction machinery from Germany is. And in Brazil the upswing is only just starting again," Rummel is convinced.

It already becomes clear - this is only the beginning. "We're just buying another company - so we can present the portfolio we're offering in Munich in Brazil in the future." Messe München is particularly strong and successful in the construction machinery, environmental technology, logistics, electronics and sports sectors - the leading trade fairs bauma, IFAT and the ISPO sports fair are well-known. "In these sectors we have the best contacts to German companies, most of which also exhibit internationally," says Rummel.

Rummel is convinced that this, in turn, will have repercussions on the domestic market. "With our new location in the growth market of Brazil, we are also further developing our leading international trade fairs in Munich. bauma in particular will benefit from the new international network".

The concrete strategy is to screen the Brazilian market for topics in which there is already a large industrial network and industrial know-how. "Then we'll see if there's someone on the market that we can work with. We're relatively open about that."

Rummel is also planning to invite the members of the LIDE network to M&T Expo. "As soon as our twelve-member team has familiarised itself with the project on site and proven its worth, we will then intensively enter into the cooperation. We need the network's experience throughout South America and want to integrate LIDE events into our activities - both in Brazil and in Munich, for example".

Possibilities of the exchange are conferences or chimney evenings. "For example, we have the idea of offering a business lunch on the subject of digitization for the construction machinery industry," explains Stefan Rummel.

Our size and the diversity of our members enable us to organize very personal conversations with high quality for everyone," Fabiana Oscari-Bergs makes clear. For the opening of the M&T Expo, the LIDE team was even able to win the acting mayor of São Paulo - João Doria, LIDE founder and globally successful media entrepreneur. Stefan Rummel is already full of anticipation: "This is a great start and a great image gain for us."

"The world has changed radically. Investors must say goodbye to many strategies that have worked in the markets over the last eight or nine years," explains Stefan Scheurer (top), global capital market strategist at Allianz Global Investors. In view of weltweiten Konjunkturbooms, inflation rates would now rise slowly. "Is your portfolio still correctly positioned?" asks Scheurer: "Do you know where the opportunities lie in the future? Und where the dangers lurk for your assets?"

The capital market expert will answer these questions at the Brazilian Embassy in Berlin on 6 July 2018.

"We will be holding an exclusive event there on the subject of 'Intelligent Investing in Times of Rising Interest Rates'", informiert Fabiana Oscari-Bergs, Managing Director of LIDE Germany, "because this information is important for all entrepreneurs who have invested part of their assets on the stock markets".

In recent years, according to Scheurer, central banks around the world have pumped seven trillion dollars into the capital markets and bought bonds for them. "Now the liquidity glut is reaching its peak. If support for the bond markets decreases, interest rates should rise. Investors are then threatened with price losses on these securities."

In an environment of rising interest rates, however, investors will have to position themselves more broadly. In his presentation Scheurer will therefore not only look at the basic investment classes equities and bonds, but also at alternative investments - infrastructure, products that aim for an absolute return independent of the capital market development, or private equity. "All these asset classes have their advantages and disadvantages. So it's the right combination that counts."

Even in the new world, the professional continues, stocks would play an important role. "Dividends can be used to generate stable investment income. I will look at the individual markets and also analyse the emerging markets that are benefiting from a positive global economy and rising commodity prices."

Because many entrepreneurs are looking for a relaxed investment that involves little effort, the professional will also introduce the instrument multi-asset fund in more detail. "These vehicles may invest in all available asset classes, use alternative investments and vary the weights of individual investments to achieve a particular return with the lowest possible risk. If this is still too risky for you, you could additionally agree on an individual loss limit in your mandate, which would then be strictly adhered to. "I will explain to you exactly how this works in Berlin", kündigt Stefan Scheurer .

Messe München reports on its activities in Brazil at the FAZ.

"Intelligent Investieren in times of rising interest rates." As part of the supporting programme, guests will have the opportunity to visit Fashion Week.

// Wie do I participate?

Please register by 17.05.2018 at: This email address is being protected from spambots. You need JavaScript enabled to view it.