I'm printing out my house. 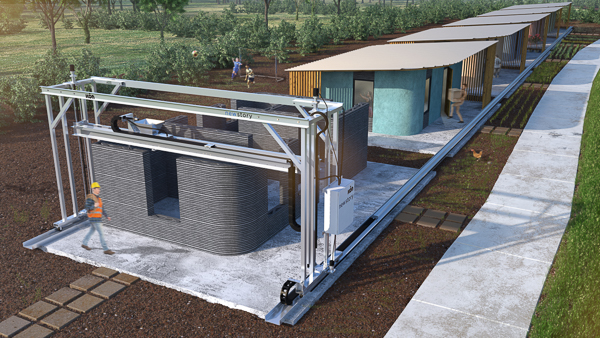 Innovation. Three young people from Austin, Texas, want to fundamentally change housing construction. Your company Icon uses 3D printing to build houses. The printed accommodation should be personalisable, but above all unbeatably cheap.

From a distance, the image looks familiar. A print head on a metal frame moves deliberately over a surface and places grey-black material in the right places. In Austin, Texas, layer by layer, an object is created in 3D printing. Only the dimensions are wrong somehow. The printer weighs a good 900 kilos. And he builds: an entire house.

"Our 3-D house will cost $4,000, it will be 55 to 75 square meters, and its walls will be ready in a day," explains Jason Ballard, CEO of the young company Icon. "The house in the video cost $10,000 and was printed in 48 hours. But it should also only prove that our printer named Vulcan works. Both printing time and price will be more than halved in the future."

Ballard promises "a construction technology company that revolutionizes housing construction". With its own 3D printing technologies and ultra-modern materials, Icon offers sustainable answers to a number of the world's most pressing questions: "How do we deal with the global pandemic of homelessness, the increasingly escalating costs of home ownership, the resilience and performance of conventional construction methods, and the challenge of eventually building non-planetary space habitats," the entrepreneur enumerates.

Extraplanetary habitats? "Imagine if one day we actually made it to Mars. What's wrong with sending a 3-D printer ahead that prints a station for the astronauts? There are also clear advantages to using the 3D printer in space - for example, it requires neither oxygen nor food."

But it's not that far yet. In the meantime, the Vulcan stands in Austin, Texas. When he arrived, curious onlookers asked Ballard what miracle material would be used for printing now. The businessman took note with a laugh: "As much as I would like to say that we invented a great fabric and now call it concrete - we didn't do it. However, concrete formulas for concrete can be as different as people. We developed our own formula that is best suited for our printing projects."

Building in the old way is simply no longer efficient for the founder: "Conventional constructions are slow, fragmented, wasteful. They have poor thermal properties that increase energy consumption, increase operating costs and reduce comfort. And materials such as drywall and chipboard are among the least resistant materials ever invented."

In contrast, 3D printing has a long series of advantages: "High speed, manual work is hardly necessary," Ballard begins by enumerating, "the printing medium concrete is a well understood, affordable, elastic material and has a high thermal mass. 3-D printing creates a continuous, uninterrupted thermal envelope. Both together create better energy efficiency. We print with pinpoint accuracy, which significantly reduces waste. And above all: printing offers enormous freedom of design. Curves and gradients are no more difficult or expensive to print than straight walls."

"I have spent the last decade of my life building a company whose overall purpose can be summed up as sustainability and health. I've worked on thousands of houses. At one point I told myself there had to be a better way to build. One that is more affordable, less wasteful and more energy efficient than traditional methods. They hadn't changed much for centuries."

What followed was a month-long study and research project on materials science and available technologies. Finally, Ballard identified 3D printing as the most promising technology for his purposes. Together with his friend and TreeHouse co-founder Evan Loomis, he worked on a prototype at weekends in his Austin warehouse.

What he didn't know at the time was that Alex LeRoux, a recent college graduate and engineer, worked more or less simultaneously with his company Vesta on a similar project in Houston. His prototype was in fact already able to print a small house. After hearing rumors for months about each other's successes and efforts, Alex and Jason finally met at TreeHouse and decided to work together.

Of course, the comfort that builders in the industrialized world are used to cannot be available for 4000 dollars. Ballard will only build the shell. Craftsmen will continue to be needed for the interior work. Walls must be clad, floors laid. The house needs water and electricity. The corresponding electrical lines, water pipes or linings cannot yet be printed, at least not to this day.

Icon's first house was also completed by the Alchemy Builders construction company. Only in this way did the 3-D house come to roof, windows, doors, electrical and sanitary installations. Nevertheless, Ballard is optimistic that his method will reduce the overall costs of house construction by 50 percent.

A key success factor could be "personalization". If it is feasible, building owners around the globe do not want a standard product, but "something of their own", which in extreme cases is as unmistakable as they themselves. Haute couture, the automotive industry with its range of extras and the smartphone industry, which makes its product unique with applications, all aim to achieve this. Soon, thanks to 3D printing, people may also be able to live in unmistakable houses.

This can be the replica of a royal castle, an igloo or something completely different. "If you want to live in a spiral, you can do it with 3D printing. One day we'll all be living in 3-D printed houses - it's just a matter of time." My Ballard. There will be open source houses, which the customer can simply download from the Internet and then personalize himself or have reassembled by specialized consultants. "Anyone who wants to can also design for themselves."

Then bricklayers, carpenters and many architects would actually become superfluous. Ballard's opinion is similar to that of many providers of "disruptive" technologies: "Professions have always changed. Today we don't find many coachmen, weavers or steam engine builders. And 3D printing not only takes jobs, it also creates new ones, for example in the development of durable, printable materials."

Critics, however, argue that the huge printers are still susceptible to faults today. In addition, when building contractors hunt for speed records, they would neglect the obligatory times that concrete needs to dry.

During operation, blockages in the flow of building material actually occur from time to time. Ballard considers the difficulties to be manageable also thanks to new materials. "We have shown that our concept works. The next step is the further development of the printer. The Vulcan II becomes much faster. We're not working on it alone, but in partnership with companies and universities such as Pump Studios, Yaskawa Electric, Alchemy Builders, TreeHouse, Keep Real Estate, Andrew Logan Architecture, Linestar Automation and the University of Texas."

When it comes to the first practical tests, Icon relies on the collaboration with New Story, a charity from San Francisco.

New Story has been aiming to help the poorest of the poor to get their own home for some time now. Houses are financed by donors and then raised on site. After three years of existence New Story had collected money for 1300 houses. Building, however, was slower than donating. Because so far 850 houses have been built. Brett Hagler, CEO of New Story: If he really wanted to make a difference, the construction speed had to be increased. This is how he became aware of the topic of 3D printing.

Ballard, Loomis and Hagler met last year through mutual friends and business partners and defined a common goal: "We want to satisfy a basic human need. A safe roof over your head."

Both parties are silent about the financial details of their cooperation. In the meantime, however, the charity is already asking for donations for the first houses from the 3D printer to be built in El Salvador. The printed house should of course be as stable as any house built by hand - and even withstand earthquakes.

Anyone who donates a house gets a film from the new owners when they move in. Anyone who donates ten houses can name a street. From 100 houses there is the symbolic key to the village community. It is still questionable how the $600,000 needed to transport the printer, for various improvements to hardware and software and for a number of tests will be financed.

Ballard sees the mission in El Salvador as both a challenge and an opportunity. "Through this work, we gather experience and data that help us improve our product." For him one thing is certain: "We will sell the first printed house in the USA in 2019."         ®

The builders of the future.

Icon is not the only company that believes in 3-D printing houses. The Chinese company Winsun3D has been printing houses since 2008 and has already convinced buyers with larger buildings. Huashang is one of its competitors on the Chinese market. Apis Cor, a Russian start-up, has been printing houses since 2016 and promises 40 percent savings compared to traditional methods. The prices are given per cubic metre of building material and are between 78 and 112 euros. The Apis Cor printer looks a bit like a solid construction crane. According to the company, several of these cranes can work simultaneously. And also in March 2018 the Italian architect Massimiliano Locatelli printed a house at Milan Design Week. It is not yet possible to predict who will be ahead at the end of the day.