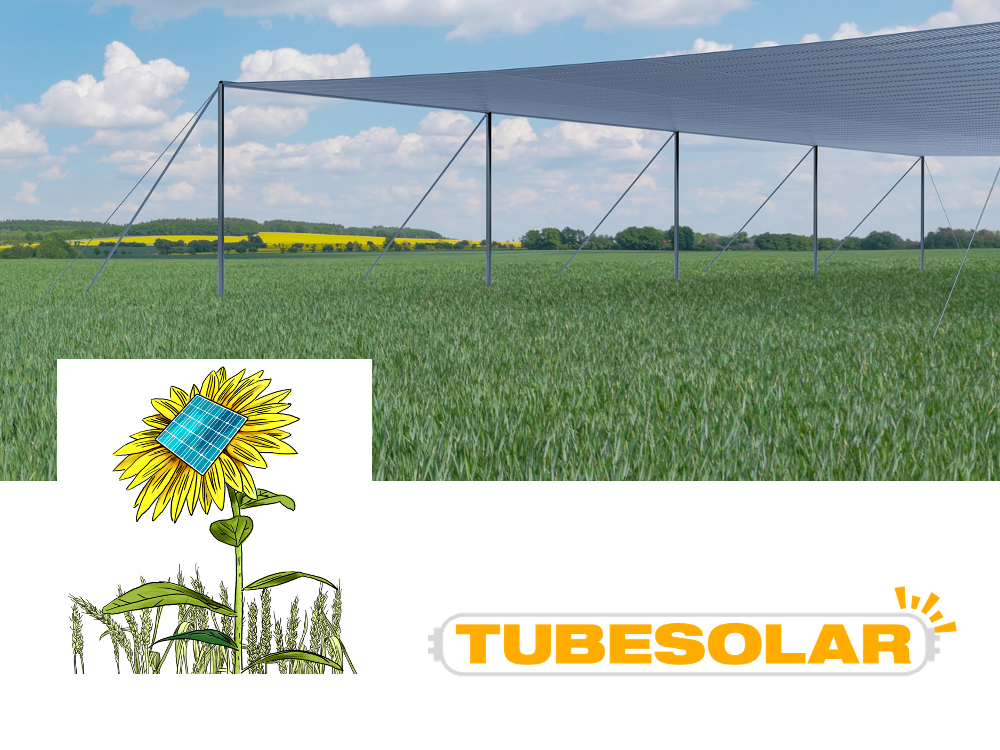 Photovoltaics and agriculture - can't that work on the same land? "It can," informs Reiner Egner, CEO of Tubesolar AG: "Vegetables, lettuces, tomatoes, chilies - all of them and many plants more have in some cases achieved better yields under our agri-photovoltaic pilot systems than on arable land without solar panels."

The idea: generate electricity with solar panels shaped like tubes. They are set up on stilts at, say, five meters above farmland. The advantages: Rain permeability and clean electricity, as well as light shading of farmland, which protects the soil in extreme sun. "The bottom line is that higher agricultural yields can be achieved while generating cleaner electricity," Egner explains. There are more and more hot days and long droughts around the world, he said. The solar tubes help reduce soil drying, they are rain-permeable, weatherproof, and tractors can drive under them. Eventually, the vision is for the photovoltaic thin-film tubes to reach an annual production capacity of 250 megawatts.

Egner's target markets, in addition to agri-photovoltaics, are industrial commercial roofs with appropriate greening - "a market with gigawatt potential in Bavaria alone for existing and planned commercial buildings. By using our modules on industrial and commercial roofs, in conjunction with green roofs, we are making a significant contribution to environmental and climate protection while generating energy at the same time." He added that the team had already solved the most important challenges regarding statics and air contact area.

At the end of 2019, Tubesolar was founded as a spin-off of Osram/Ledvance's laboratory production in Augsburg. In addition to Reiner Egner, Chief Technology Officer Jürgen Gallina has been a member of the board since then, and the majority shareholder is Kulmbach-based entrepreneur Bernd Förtsch.

At the time, Osram/Ledvance manufactured fluorescent tubes that serve as the basis for photovoltaic thin-film tubes, among other products. "The product needed an investor because the Chinese investors didn't want to set up solar production in Germany," Egner recounts. And they weren't interested in the solar tubes or the employees' know-how. Vesselinka Koch, who had brought this idea of thin-film tubes to Osram, asked him to take a closer look at the company - which he did.

In doing so, Egner met motivated developers and mechanical engineers with a great deal of experience in a market that the trained banker considered to have a promising future. "We then found strategic investors who acquired patents for the production of solar tubes and took on ten employees as a first step."

A cooperation agreement Tubesolar has with U.S.-based Ascent Solar (ASTI) offers particular potential. The start-up has acquired a stake in the U.S. company for $2.5 million, securing a second source of supply of large volumes of thin-film photovoltaic film for its glass tube modules. There are also plans to set up a joint production facility in Germany and to develop special solar cells.

These CIGS perovskite tandem cells are very efficient and inexpensive to manufacture. "They therefore have disruptive potential in the solar industry, as the market-leading monocrystalline silicon cells are getting closer and closer to their practical maximum efficiency," writes analyst Karsten von Blumenthal of First Berlin Equity Research.

In 2020, Tubesolar posted a net loss of €2.3 million. The first half of 2021 also saw no sales. The net loss was 1.2 million euros. The company needed money primarily for the construction of a fully automated production facility. For this purpose, the Free State of Bavaria has promised a subsidy of 10.8 million euros, and Tubesolar is raising another part through two capital increases that have already been placed. In March of this year, the most recent was successfully completed with 6.5 million euros. "With our automated production facility, we can scale and offer competitive prices," Egner said.

The biggest risk for Tubesolar is the pending certification of the modules by TÜV. Egner expects it in the next few months. Production can only start once certification has been granted - "we expect to start sales in the second half of 2022," informs Reiner Egner.