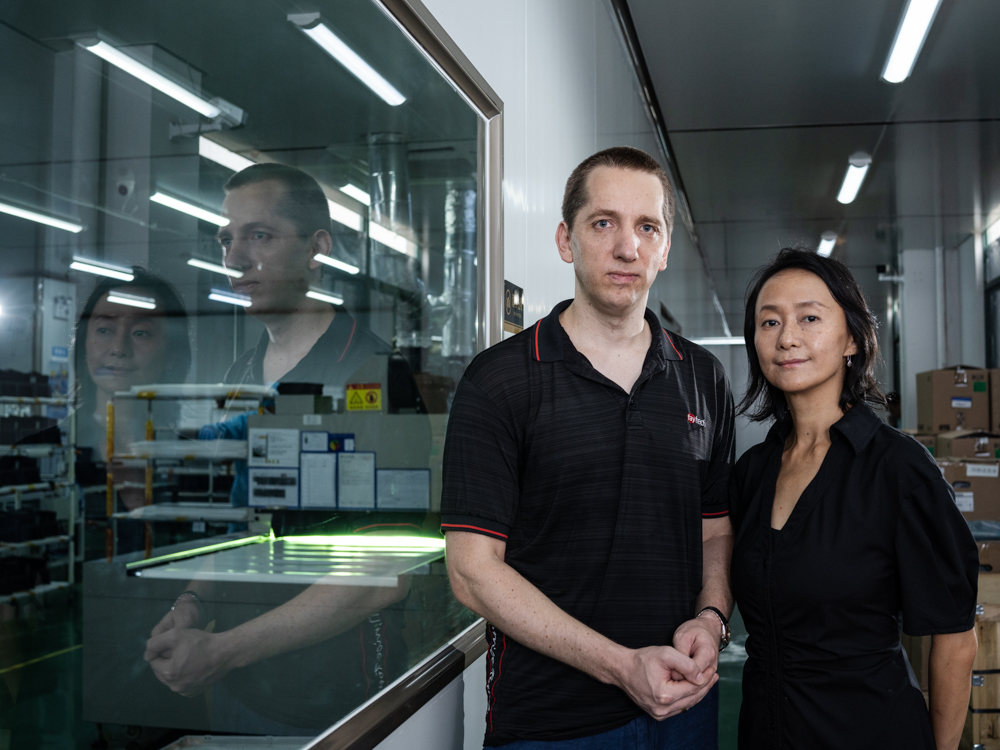 Expansion strategy. Arne Weber and his wife Fan Yang have successfully built up a tech company in China. In order to accelerate growth, the entrepreneur is now turning his attention back to his home country. An exciting adventure journey between different cultures and company structures is heading for a happy ending.

"When I look back at the past three years, everything that could go wrong actually went wrong," says Arne Weber, founder and owner of Faytech AG: "After growing our start-up in China from zero to around $25 million in revenue from 2008 to 2018, we strategically prepared to jump over the $100 million revenue mark." Three new manufacturing halls. A new organizational structure. A new IT system. The year 2020 was supposed to bring the quantum leap. "But then Corona came along. And when the economy was up and running again in 2021, supply chain issues threw a wrench in our plans. It was desperate."

Except that Arne Weber doesn't sound desperate at all. Rather, he sounds like someone who already has a solution in mind. Whoever asserts himself as a German in China is obviously hardened. "In 2008, 13 years ago, it was indeed still the Wild East in Shenzhen. Even though I had a Chinese wife, it was a real adventure to start up a company as a foreigner."

Entrepreneur Arne Weber's story began here in Germany. Early on, he developed a great passion for computers and technology. At 14, he was assembling computers for others, improving their performance, and four years later he had his own computer shop. But it didn't pay much. That's all the more reason his stock trades brought him so much more at the time. "It was the new-market era, and I was making more from my stock trades than my father made from a full-time job."

But as quickly as his portfolio had grown, it shrank when the new-economy bubble burst. But this episode shows him what can be done with a good idea.

While studying at a vocational academy and working as a trainee at Dresdner Bank, including in its venture capital department, he bought into a subsidiary of the then bankrupt new-market company Metabox. "We were developing set-top boxes and devices for interactive television. We were really good and had developed a video-on-demand system that could have easily rivaled today's Apple TV." Unfortunately, the time was not yet ripe for such ideas. In addition, new technologies were coming to market every six months - DVD, Blu-ray, HD DVD, HDFMI. "We couldn't keep up with that and had to give up in 2006, when one of our most important customers couldn't pay our bills either."

Again, Arne Weber is at the beginning. And this time, really under pressure. "My wife Fan Yang and I had gotten married in 2006. We had to live on something."

For his first company, he had ordered touch screens from China. Wouldn't it be an idea to import them further and sell them here? "However, a pure job as a middleman would not have fulfilled me. I wanted to do something myself, be creative, bring in my own ideas. And that seemed possible to me. Because the imported touchscreens had major quality flaws."

In 2008, the two moved to the Middle Kingdom, more precisely to Shenzhen in a technology park, to produce their own, better touchscreens. "My wife, being Chinese, founded the production company, and I brought in my German sales company," he says, explaining the structure. But that, he says, was the easy part of his venture. The entrepreneurs can't get capital to build the company. "German bankers waved us off because the production was in China. Chinese banks feared we would disappear to Germany with the money. So we had to finance everything ourselves, partly family and friends provided us with money."

But now the real challenges begin. "China was really wild in 2008. Name me any prejudice against China, and I can tell a story to match. For example, we had a supplier, officially a one-man operation, but actually had 150 employees. This company smuggled its exports across the border in Huanggang. Our Chinese tax advisor at the time advised us to do the same to avoid paying taxes. Of course, we didn't follow the advice."

An even greater difficulty than getting parts legally is getting parts of the desired quality. "It was always the same: a preliminary product - a cable or a touch controller - was supplied, we found quality defects, and in the end we had to make the parts ourselves. That was our most important lesson. Anything we can't understand and control goes wrong. So we have to do it ourselves."

On the plus side: The rapid growth in the Middle Kingdom and the dynamic technological development in Shenzhen, China's Silicon Valley, is a tremendous opportunity. "That was exactly the environment where we could grow up fast, if we just overcome the obstacles I mentioned."

Looking back, he divides his company's development into three phases. "The first phase was simply about surviving. We did that by gradually taking everything into our own hands." After all, that's how sales went from zero to five million dollars a year. The second phase was to accelerate. "Now we had something going. So by about 2018, we were able to grow our revenue to more than $20 million without any major problems. We funded the growth itself out of our own cash flow."

But then it gets complicated. Expanding from five to 20 million in revenue still worked in the original company structure. But the leap from 20 to 100 million in sales urgently needed a new organization, new management - but above all, a blockbuster product, a true technical innovation.

Weber's magic word was "optical bonding." "Touchscreens consist of two glass panes, a display and the touch surface, the touch. There is a layer of air between the two panes," he explains. "When light hits glass, then air, then glass again, it refracts. Then the image on the monitor gets very poor quality." With optical bonding, the two panes are joined by a clear adhesive so there is no layer of air between them.

"We bond glasses in the first process stage. As a result, the resolution on our touchscreens is much better than competing products. They last longer, are clearer, more robust and better suited for outdoor use." Meanwhile, Faytech AG is indeed the market leader for optical bonding on large-format monitors. The customer list reads accordingly impressive. It includes names such as Dell, Honeywell, Komatsu, Qualcomm, Siemens and Unilever.

Now Arne Weber had a real turbo in his product portfolio. In 2018, he is bringing a CEO on board to take the organization to the next level. "I don't like meetings, organizational tasks or presentations. I prefer to be in development, working on innovations and love to tinker and be creative. So I knew we needed professional management to take care of strategies, collaborations, sales."

He found what he was looking for at Freiburg-based Pyramid Computer GmbH. The company's products - self-service terminals, information and service terminals, self-checkout solutions - are the backbone of digitalization solutions in the end-customer business of food retailers. That's where Peter Trosien comes from. And since the business models have a lot of overlap, he can get started quickly. Now Faytech has the prerequisite to reach the strategic revenue target of 100 million euros per year.

But when Faytech management hears that Pyramid is to be sold, it develops a new plan: it wants to acquire Pyramid. "We know from our CEO Peter Trosien that both companies are a perfect fit, Faytech with its innovation and development power and Pyramid with a strong sales force. It is the logical shortcut to achieve the growth target. Especially the excellent networked sales and experienced project team was very interesting."

But Faytech is too late. In November 2020, Mic AG, a nearly empty shell company, acquires Pyramid in a complicated transaction. Mic AG thus gets operational business, Pyramid an indirect stock exchange listing, thanks to which the company can finance its own expansion via a capital increase in the following months.

Over? "In life, you always see each other twice," grins Arne Weber. Mic AG, for its part, now wants to take over his company for around 15 million euros. Weber actually thinks this price is too cheap. "But the pandemic and the supply bottlenecks have made life difficult for us. We have come through this well, have grown in 2020, remained profitable and will also grow in 2021. But with a financially stronger partner, we would have come through the crisis much better," he informs us and concludes: "All in all, this is a huge opportunity for us. We can produce a lot for Pyramid and at the same time cover a value chain that would otherwise be split between Asia, Europe and the USA to a large extent completely on our own. That saves on transport costs and ultimately increases the profit margin."

In addition, Pyramid's global distribution would be a tremendous asset. "It does make a difference whether a company has five or 30 sales people who are also globally networked." And let's not forget the greater purchasing power. "We need more material, and that's how we can push through cheaper prices." To be sure, Weber assumes that Faytech would have developed in the desired direction on its own. "But it allows us to reach our goal of $100 million in revenue faster. That's the next turbo we can ignite. It's a win-win situation for everyone involved."

Weber himself is to receive 4.5 million in cash and the rest in Mic stock. In addition, an earn-out component of a maximum of €7.1 million is under discussion if certain target figures are achieved in the following three years. Arne Weber would thus become one of the largest single shareholders of Mic AG. In his daily life, however, not so much would change. "I plan to stay on in Shenzhen, lead the development of the newly merged company here and take responsibility in the team."

As this article goes to press, auditing is still ongoing due to the complexity of this cross-border acquisition. But one thing already seems clear: Arne Weber's entrepreneurial life remains an adventure.

// How to invest in Faytech.

If the takeover of Faytech succeeds, the company will become indirectly investable through an investment in the listed Mic AG. This year, Mic's largest holding Pyramid Computer GmbH - which accounts for the bulk of Mic's business - expects sales of between €58 million and €63 million. Pyramid's pre-tax profit is expected to be around 4.9 to 5.3 million euros. However, given the current supply chain issues that Pyramid is also suffering from, that might be a bit too optimistic.

If Faytech were to be added from January 1, 2022, analysts estimate that Mic's total revenue would rise to €93 million next year, with pre-tax profit rising to €6.3 million, or 16 cents per share.

Overall, Mic's management expects the collaboration between Pyramid and Faytech to result in annual cost savings of about one million euros. This should increase the profit margin. The share price is currently quoted at 2.60 euros. The company is valued at around 50 million euros on the stock exchange. This is not much in view of the growth prospects. For example, analysts at SMC Research expect sales of around 140 million in 2025. A piquant detail on the side: In the first negotiations with Arne Weber, Mic shares were valued at 3.30 euros.