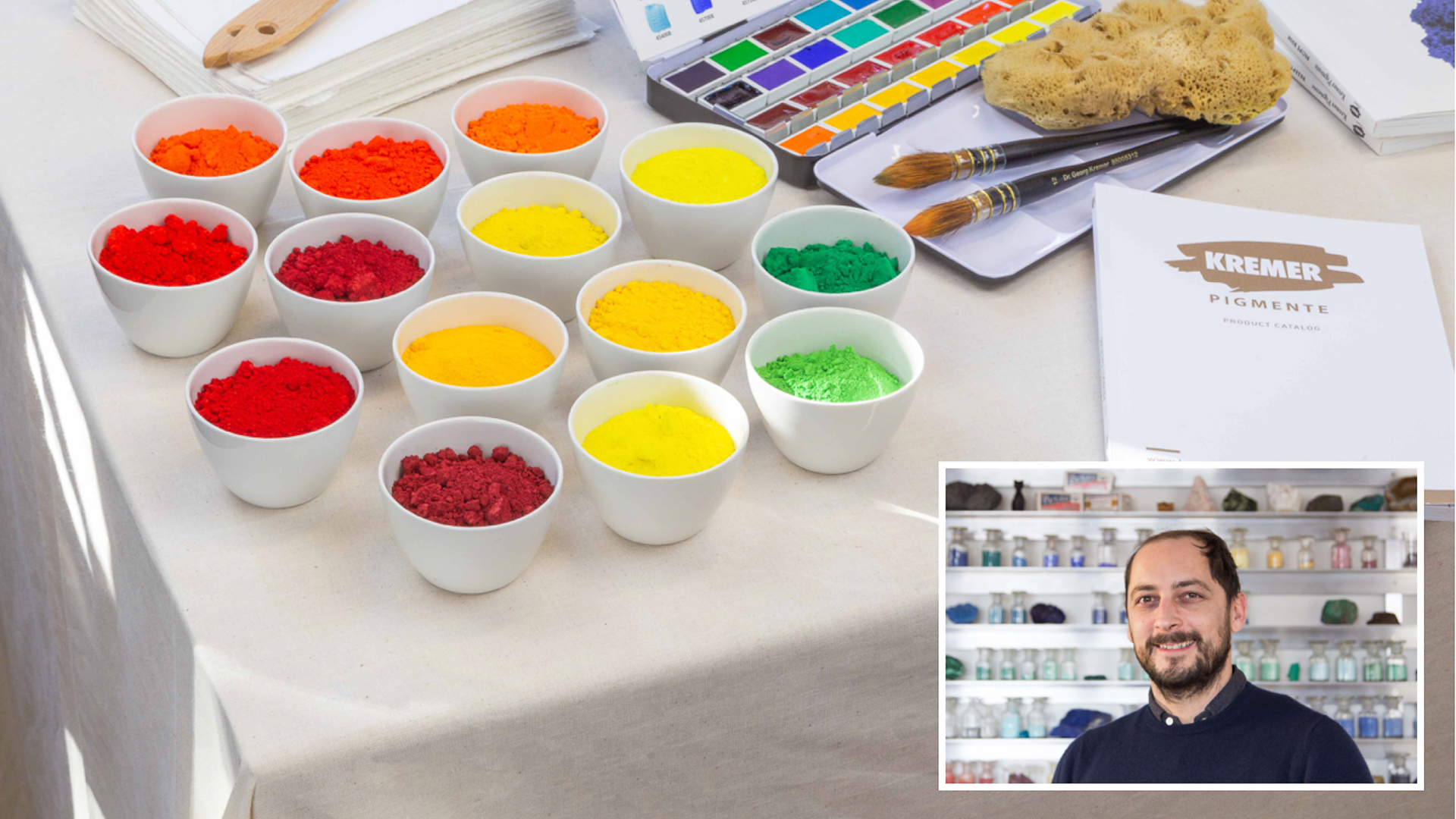 Exclusivity. When the premier league of international museums and artists is looking for historical colours, it travels to the Swabian province. There, the family-owned company Kremer makes millions in sales with unique color pigments.

As a child, David Kremer says, at some point he was no longer able to see quarries. In the meantime, this has fortunately disappeared. When the junior boss of the Allgäu-based company Kremer Pigments goes on a trip today, he brings tons of stone or colored earth to Aichstetten, in the deep Swabian province. Because the 37-year-old trained photographer is just as fascinated by what can be made of it as his father, the 72-year-old company founder Georg Kremer: color pigments.

"Our specialty is the production of pigments, some of which have been forgotten for centuries, from raw materials such as earth, stone, bone, plants or minerals," explains David Kremer, who today runs the business together with his father. Pigments that are coveted by artists such as Anselm Kiefer of Germany or museums such as the New York Guggenheim, the Getty Research Institute in Los Angeles, the French Louvre, the Spanish Prado, and the Munich Pinakothek museums.

This lucrative business idea came about by chance. In the mid-1970s, a restorer friend of mine was looking for a certain blue for the sky depiction in a medieval English church. A blue that the industry, which focused on chemical paints, no longer produced. Georg Kremer, then an employee in the analytical chemistry department at the University of Tübingen, "had no idea about the production of paint". But his interest was aroused.

Kremer looked through books and found a recipe from 1820 for the "smalt" used by baroque painters. This pigment can be obtained from intensely deep blue tinted cobalt glass. The finer the glass is ground, the paler the colour tone turns out. In his cellar, which was converted into a laboratory, the doctor of chemistry worked on the production of the smalt pigments. With success. The color pigment perfectly complemented the sacred vault of heaven.

The restorer's network was soon informed that there was a chemist in Tübingen who liked to delve into the production of historical pigments. In fact, Kremer had acquired a taste for smalt through the production of smalt. "My father went on a journey to paint," says David Kremer. He fiddled around with color pigments he thought he had forgotten and visited all the important trade fairs in Europe with a small suitcase full of pigments. The cellar hobby became a company.

In 1977, the chemist founded Kremer Pigments with an equity capital of around 25000 marks. For the first 15 years, the company consisted only of the founder and two employees. Today, it has almost 50 employees, two sales offices in New York and Munich, and a turnover of about four million euros per year. "With an annual growth rate of five percent," says David Kremer. "All financed from its own resources, without a single bank loan."

The turnover is divided almost equally between Germany and abroad, led by the USA, then France, Italy, England and Switzerland. Initially, the product range was limited to one page of the catalogue, but today it comprises 260 pages with around 6000 products. "However, we only produce ourselves what we cannot buy in better quality on the market," explains David Kremer. For example, of the more than 1500 pigments, around 250 are produced by hand in our own paint mill. Kremer also sells modern, synthetically produced pigments, as well as old paints and oils, synthetic resin, binding agents and solvents, tools, brushes and specialist literature. "But of course, in-house production is our unique selling point."

Particularly when it comes to the preservation of monuments, restoration and sophisticated painting, customers do not compromise. Then a visit to the world market leader in this narrow segment is a must. Raw materials from all over the world are ground, sieved, scraped or filtered here in elaborate manual work to produce fine pigment powders.

Since the 1980s, the manufactory has been located in a 17th century flour mill in Aichstetten. At that time, the ailing mill was renovated with the help of the whole family, the Aitracher Mühlbach flowing under the main house was cleaned and the 100-year-old turbine was made to work again.

Today it supplies the company with electricity. For the grinding process, an Italian press, a so-called pan grinder, with two upright, heavy discs rotating on a base plate, was also brought to Aichstetten. This is where stones and lumps of earth are now crushed, such as the lapis lazuli that has been mined in Afghanistan for 8000 years. "Our local scouts clench their hands over their heads when they hear that we are pulverizing the precious semi-precious stones."

The entrepreneurs named the pigment extracted from the gemstone "Fra-Angelico-Blue" - after the Florentine Renaissance painter. One kilo of this pigment costs around 16000 euros. Although in-house production only accounts for a small part of the product range, lapis lazuli blue, purple red and Veronese green generate about a quarter of the turnover. Purple red, produced from a snail found in the Mediterranean, is the most expensive product at 2000 euros per gram. Ivory black, made from the tusks of elephants, is only allowed to be "charred and sold" by Allgäu residents under strict conditions imposed by the Baden-Württemberg regional council. One gram for 5.70 euros, "not really expensive", but exclusive. "Actually, only we do that. Worldwide."

Thanks to its good relations with competitors, including in the field of chemical paint production, the Allgäu-based company can now provide its 200,000 or so listed mail-order customers with everything an artist's or restorer's heart desires. The largest order was for pigments for the so-called Sistine Chapel of the 21st Century, the ceiling painting in Geneva's UNO Hall of Human Rights, completed in 2008. "We sold tons of pigments back then," recalls the junior boss with satisfaction, who also joined the company in the same year.

When his father, who was 60 years old at the time, wanted to arrange succession in the company, his sisters, who were four and two years older, would have turned away. Kremer, who had just finished his photography studies in Berlin, came to Aichstetten with his Spanish wife and young son. "For two years, on probation." He had travelled to trade fairs, made colour journeys himself, dug in quarries, and thus always "slipped in a little further".

Today, father and son are "a well-coordinated team". However, the senior still "holds the most shares in percentage terms", with the rest divided between David Kremer and the two sisters. For the junior boss, too, the cooperation works surprisingly smoothly. "Things are discussed out with us," he grins relaxedly. He has decided "to modernize slowly and not to make any quick and radical changes."

A clear division of tasks between father and son "they don't need". His father has built up the 4000 volume specialist library, is very good at digging up "old recipes", the son's strength lies more in communication with the outside world and raw materials trading. "I really enjoy that." Is the final handover of baton a topic? No, "my father can work here as long as he wants," says the junior boss with a wink. Here too, the Swabians rely on dialogue instead of confrontation.

The current pandemic shows just how creative and adaptable the company is. "Although we had to close the stores in Munich and New York, we are doing really good business with solvents. The starter sets for watercolours and oil paints, which were launched last year at around 70 euros each, are now also proving to be crisis-proof.

"We see ourselves as a provider of knowledge in this growing market," explains Kremer. With the sets, consisting of three different pigments, binder, tools and instructions, interested laypersons can mix colors themselves. The Creative Impulse Award 2020, which was presented at Creativeworld, the leading international trade fair for the creative market, underlines the fact that Kremers is in line with the latest trends.

More ideas for the future? David Kremer thinks about something, gets up and fetches three small bottles with pigments. Light green, sandy beige, dull red. He had visited the landscape painter Peter Land in Iceland. In the west of the island, near the volcano Snaefellsjökull, he would have found these three beautiful earth colors at midsummer. "They only exist there. Around the globe, there are still many places like that. I just have to go through the world with open eyes." ®