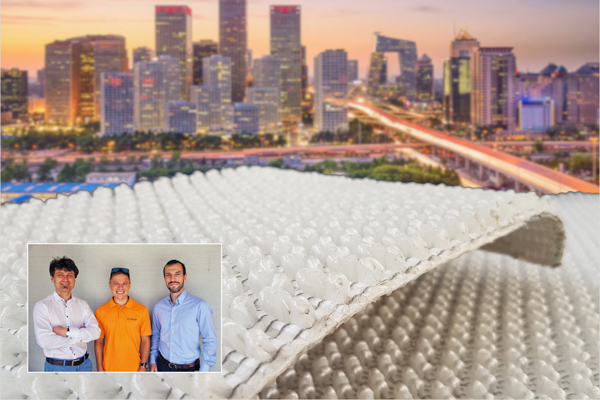 Innovation. Jens Reindl develops textile sliding mats in his Mr. Snow GmbH, which make it possible to practice skiing without snow and also in summer. In times of climate change, the future could belong to the business model from Chemnitz.

If it were up to Jens Reindl, the winter could last twelve months. To be able to sweep down a steep slope with your snowboard every day. That's why the industrial engineer from Chemnitz was immediately there when he had the opportunity in 2009 to take a summer ski slope in England under the edges. "The mats had a kind of brush structure and had to be watered. All in all the whole thing was very difficult. I thought to myself, "This must be better."

It is a good thing that a new project is just starting at the TU Chemnitz and is even being funded by the Federal Ministry of Economics. Its goal: to develop alternative solutions in times of no snowfall. It takes three years before the research group, which also includes Reindl, presents the first mats for a textile ski slope.

The special: The prototypes need neither snow nor water. They are simply laid out and anchored in the ground with screws. Thousands of pimples with air in between act like a soft cushion and provide as authentic a "snow feeling" as possible.

When he sees how well the technology works, Reindl senses a business model. In 2013, together with Arndt Schumann and Felix Neubert, two friendly engineers from the research group, he founded Mr. Snow GmbH as a spin-off of Chemnitz Technical University. All three are certified snow sports instructors by the German Ski Instructors Association. Schumann's passion belongs to the good old Telemark style, Neubert is a passionate cross-country skier - the broad interests in the snow should still prove to be an advantage.

The trio knows that they have to develop a high-tech plastic with the lowest possible friction loss. "The coefficient of friction between the ski surface and the mat is the measure of all things for us. Ideal snow has a coefficient of friction of 0.01 - the challenge is to get as close as possible to it. At the same time, the plastic must not be cut by the sharp edge of the ski or snowboard."

That's why Mr. Snow needs special, sophisticated fibres for his ski carpets. Of course, these cannot be bought at the DIY store. So the entrepreneurs develop a special web technology. "First, we used five old semi-automatic looms. However, they were not robust enough for the rigid, smooth yarn. In the meantime, we have bought a newly developed weaving machine for around one million euros, which works just as well, but much faster." The threads of a special yarn are woven together on 1500 bobbins in such a way that a knob-like, wavy fabric is created. This is then coated with a special adhesive that holds the fiber structures together even more compactly.

"Our material today already has an average coefficient of friction of 0.1. We are constantly working to further reduce this value. Sometimes we can make 0.09."

Already now skis glide well on the mats consisting of three layers - the standard size is two by ten meters. The lifts allow the alpine skiers to make real turns because the boards can edge in. It is interesting for cross-country skiers that they can squeeze their way through the snow in a similar way. Even carving on the latest fabric panels is getting closer and closer to driving on natural or artificial snow. Reindl and his colleagues now hold several patents for the structure of the multi-layer and air-permeable fabric.

"We call it mountains and valleys," explains the entrepreneur. "On the rounded mountain tops the ski glides along, while the ski edge dives into the next valley and the whole ski finds a foothold." Only skiing in deep snow can't be done with such a mat. "We cannot and will not beat nature," laughs Reindl. "But at least since this year our product has been comparable to a fresh, well-prepared piste."

Reindl never tires of highlighting the advantages and market potential of Mr.-Snow mats: The shock-absorbing function of the lanes not only increases ride comfort but also safety. There is no need for specially prepared boards - normal skis are sufficient. The plastic does not scratch the skis. Ski halls in which snow is produced with high energy input would become superfluous. And the mats would ensure the existence of the operators of small pistes in low altitudes and shorten the access routes for many skiers:

"We will not be a substitute if, for example, there is no snow at all in the Alps. We can't do winter magic. But we can support smaller areas with the mats and enable ski schools to teach them. This makes the important Christmas business safer. And ski clubs can train earlier."

It is particularly interesting that it is also possible to mix snow and mat "as long as the snow groomer is used carefully". Mr. Snow's product thus becomes the ideal supplement for areas where snow cannons don't make sense, or for times when it's simply too warm for snow-making. In addition, the mats could be used at neuralgic points, for example at narrow spots on slopes. Or in the wake of drag lifts. Then the cannons could fire where the artificial snow is needed more urgently - on the piste.

The use of the new technology is also interesting in terms of price. To prepare 5000 square meters with machine snow and to keep them passable, according to Reindl, costs about 250000 Euro per winter. "The mats cost about twice as much, but easily last ten years and can be used all year round."

In Geilo, Norway's oldest ski resort, the ski season will begin at the end of September with the help of mats. At the Berlin Christmas Market at Potsdamer Platz, a slide for children will be equipped with mats by Mr. Snow again this year. "Even from Indonesia we have an order."

A very large market could indeed develop in Asia for Jens Reindl and his partners. After all, head of state Xi Jinping had announced in December 2017 that he wanted to increase the number of skiers in his own country from seven to 300 million by the time of the Olympic Winter Games in Beijing 2022. In order to achieve this goal, pistes must also be created in the warm south.

Of course, the people of Chemnitz would like to cut themselves a big piece of this cake. But they also know that it is not so easy to gain a foothold in China. "We pre-produced for a job some time ago, which then burst. The result: thousands of square meters of track in the warehouse. And hardly any cash left."

Now Mr. Snow has hired a Chinese man as his strategic advisor. "We can imagine producing on site one day. But we do not want to focus one-sidedly on the People's Republic. Business in the Alps is currently also growing very dynamically."

The start-up company turned over around one million euros in 2018, generating a small profit for the first time. By 2020, sales are expected to reach two to three million euros.

Reindl does not believe that competitors from Italy, Austria and Great Britain can become dangerous for him. "They primarily produce small plastic sheets that are not as soft as our mats. The driving experience on unserem Produkt far surpasses anything familiar. In addition, the airy structures do not expand when exposed to heat. They do not slip and do not throw waves. And the materials from Britain still need permanent irrigation."

However, one point of criticism remains: Reindl's raw material is plastic. A substance that has come under fire as the cause of enormous environmental problems. "We don't produce disposable items," defends the entrepreneur, "because we guarantee at least ten years of service life. And experts confirm that the mats, which were nominated for the Saxon Innovation Prize and won the ISPO Award 2019, are recyclable."

It was also important to consider the entire life cycle assessment of the alternatives. "The energy consumption of snow cannons is huge. In the future, fewer and fewer consumers will tolerate gigantic amounts of energy being blown out to produce artificial snow. Why shouldn't demanding customers want to ride on our tracks when they see that cannons run less often and the snow groomers don't have to swarm out every night?"

Reindl and his comrades-in-arms have a clear idea of what to do next with Mr. Snow: "We want to be the world's leading provider of artificial ski slopes in five years' time." To do this, they have to convince not only the buyers of the mats, but also the consumers, i.e. the athletes. They have good arguments and a clear vision: "Our main concern is the localization and regionalization of skiing. It's about making it possible for people to train on site at the end of the day and at the weekend - and then to slide down the perfect snow slope during their winter holidays, which may also be supported by our mats."

Perhaps, the entrepreneur thinks, in the future it will simply no longer be ecologically acceptable to drive hundreds of kilometres by car (often oversized) just for one weekend in the snow. Regional and inexpensive lift operators could then experience an upswing thanks to the mats. "It's all just a matter of getting used to it. In the not too distant future, the mat will be as normal as the heated chairlift seat is today. 20 years ago nobody could really imagine that." ®

How to earn it Silke Lauenstein 457
"The best is yet to come," said Wolfgang Trier a…

How to earn it Silke Lauenstein 524
In the latest issue, private wealth told the…

Editorials Klaus Meitinger, Moritz Eckes 478
Dear readers, We are actually hesitant to use…

Opinionleader Prof. Jochem Marotzke 452
What are the scientific facts around climate…

How to earn it Klaus Meitinger 718
entrepreneurship. The couple Martine and…