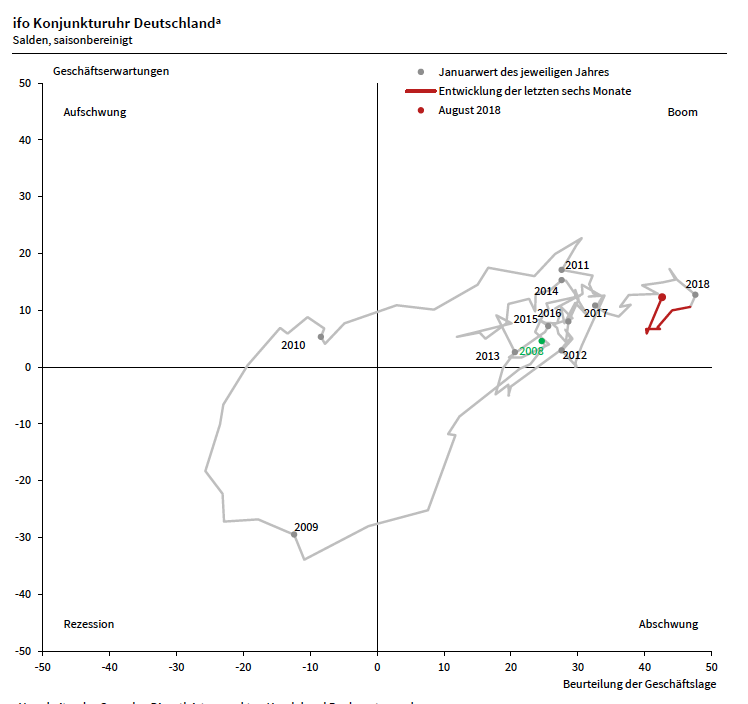 The ifo business climate in July brought a massive improvement. The most important component for us - expectations for the future in industry - has risen significantly again after eight consecutive declines. Expectations have now even returned to the level of January 2018.

With this brilliant rise, the danger of the German economy soon slipping into the downturn quadrant of the ifo economic clock seems to be averted. And the ifo traffic light is now back on "green" as well. Green traffic light values signal probabilities of greater than two thirds for an expansive phase; 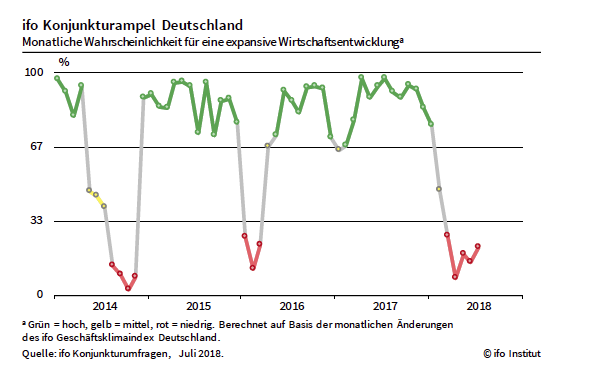 It is also positive that export expectations have risen further. Their improvement a month ago, after seven declines, we had already called at that time Silberstreifam Horizon. We pointed out that this result came before the meeting between Juncker and Trump raised hopes that the trade dispute between the EU and the US could be defused. And that in this case, a much more optimistic perspective for the German economy can be developed. In fact, according to the ifo Institute, the ceasefire with the USA is now contributing to a better mood in addition to the strong domestic economy.

Is this the turnaround?

According to the ifo Institute, this would require a three-fold increase in the expectation component. However, it should be remembered that such a massive correction of expectations within one month was very rare in the past. The abrupt changeover of the economic traffic light gives rise to the assumption that the rule of three for business expectations could delay the turnaround this time.

A month ago, we described the risk for investors as follows: "If the outlook improves quickly, the ifo indicator would probably only give a new buy signal very late";

This scenario could occur now. But there are still two hurdles before a happy ending. The USA and China have indeed resumed their talks. However, the introduction of 10-25 percent punitive tariffs on Chinese goods worth 200 to 250 billion dollars in September is still on the table. And the presentation of the Italian budget in the coming weeks also has the potential to cause irritation on the capital markets;

This is a difficult situation for investors. Should the trade dispute be resolved, this would probably result in massive price gains on the stock markets - and the ifo indicator would react far too late. On the other hand, the implementation of the threatened import duties and the corresponding response from China would probably cancel out the recovery in business expectations.

In view of the decline in business expectations since the end of February, the private-wealth stock market indicator still suggests only an equity quota of between zero and 30 percent, although the positive indications of the capital market seismographs have made it appropriate in recent months to position itself closer to the 30 percent;

Nothing has changed in this respect. However, the risk of missing out on a significant upward movement has increased. One way to "insure" against this is to purchase call options while maintaining a low equity ratio. Why don't you talk to your banker about it?